Former Fullerton Police officer Miguel “Sonny” Siliceo — recently fired by the department — yesterday pleaded guilty to a misdemeanor charge of PC 149, Assault and Battery by Officer.  The conviction follows on the heels of a false police report filed by Siliceo accusing a man of resisting arrest.

What the Orange County DA press release conveniently left out is that Sonny was originally charged with PC 118.1, a Felony.  As is common with criminal cases, a plea bargain of a lesser charge was offered to avoid going to trial. 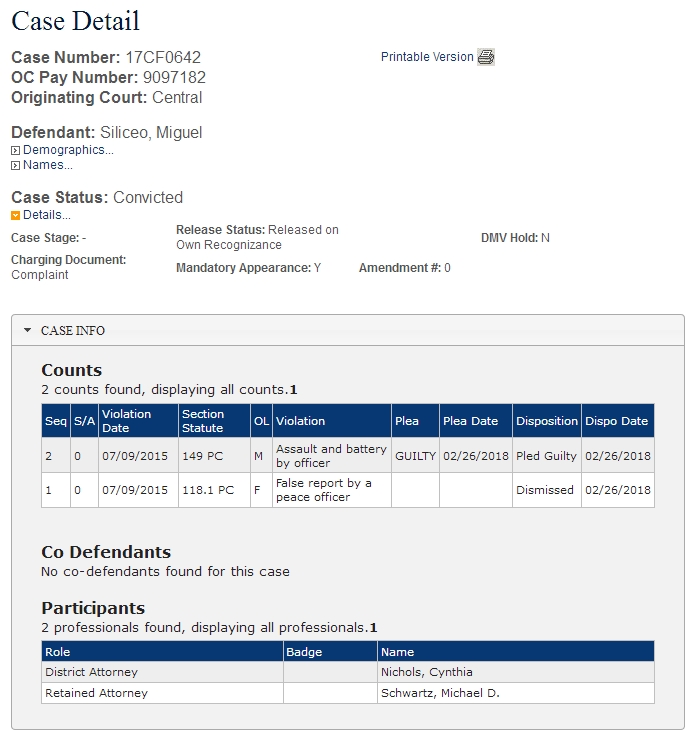 And what a bargain it was.  Not only did Sonny escape a Felony on his record, the plea deal ensured his CalPERS pension would be left intact.

Under California Govt. Code section 7522.72, a Felony conviction in the performance of official duties would have barred him from accruing additional CalPERS service credits after July 9, 2015 — the date of the crime.

Instead, Sonny remained on patrol until October 2016, and then on paid administrative leave for well over another year, all the while collecting a salary and accruing additional CalPERS credit.  Given Sonny’s salary of over $100K, and under the 3% @ age 50 retirement formula, the time between the July 2015 date of the crime and his February 2018 termination guarantees him an extra $7,000 to 8,000 per year (maybe more) until the day he dies.

This miscarriage of justice will net Sonny, currently age 52, an additional:

It is important to emphasize this is NOT the total size of his pension, it is the additional amount he will receive after the date of the crime he committed while on-duty.  He gets to keep this money because he was convicted of a Misdemeanor, not a Felony.

Quite the deal in return for a measly 30 days in Orange County Jail and three years of probation.  Crime really does pay when you’re a government employee and the DA has no desire to pursue a felony conviction.