(Update: According to the agenda forcast, the vote on this ordinance will be held on March 6, 2018)

Writing for FFFF is a volunteer effort, aside from the stipend we receive from NASA and the Round Earth Cabal (which really hasn’t kept up with inflation, if we’re being completely honest here). Our lack of compensation gives us the advantage of calling things like we see them, without having to worry about how our opinion will play with our employer/advertisers, but it also means that issues often come up and none of us here at FFFF have the time to dig into the issue and provide any meaningful commentary on the subject.

This was the case for the recent vote on the Planning Commission, which will soon be appearing before the City Council, to rezone all commercial property to allow for homeless shelters provided they operate with a CUP. The decision was made as part of a settlement with Curtis Gamble filed through the Pacific Legal Aid Foundation. Local resident Scott Hess, who is opposed to the rezoning, has investigated the change to the ordinance, and much of the information below is from my email exchanges with him on the subject.

On January 24, 2018, the Fullerton Planning Commission adopted a code amendment to allow 24 hour Emergency Homeless Shelters  in any of the commercial districts in Fullerton. 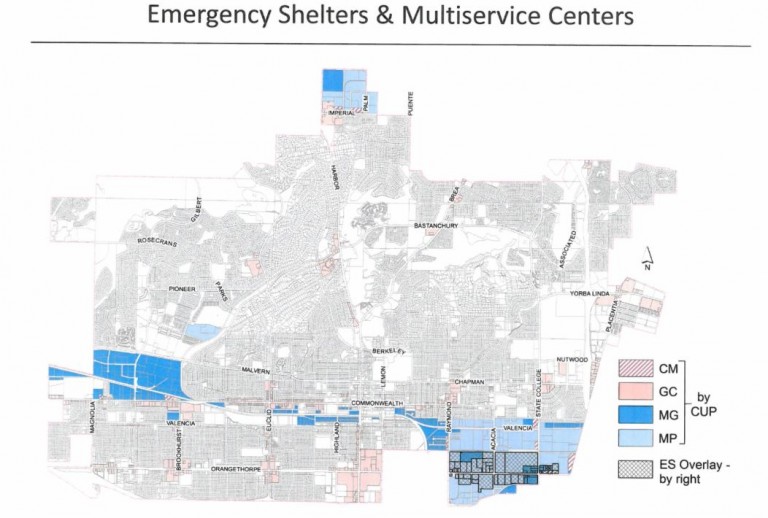 This rezoning was brought on as part of the settlement in the Gamble matter, and is a substantial change from our current zoning on shelters. This zoning would have, for example, allowed the construction of a shelter on the 301 Commonwealth site (the same one that was voted down by the Council in 2013), and can operate by other schools as well, although any shelter which wishes to operate in these no locations would have required a CUP to do so (emergency shelters that do not wish to apply through the CUP process are still limited to the industrial areas of the city).

The City of Fullerton Planning Commission staff report can be found here.

Hess argues that the current ordinance complies with state law and provides space for sufficient shelters in the City. The new areas, as Hess, notes adds an additional 2300 acres to the locations and, if adopted “Fullerton will probably have the most sites eligible for emergency shelters for the homeless than any other city in Orange County.”

On the one hand, it is difficult to see why someone would want to build a shelter in the newer, re-zoned areas and not the areas already zoned for the usage, as the new locations will require a CUP to operate, have parking and noise abatement issues to comply with, and the properties tentatively re-zoned for shelters are more expensive to purchase. On the other hand, all of this was true with the 301 Commonwealth site, and we came within one vote on the City Council to approving a shelter at that location.

Hess noted that at the meeting there were several people who advocated modifying the ordinance further, proving for variances if the parking requirements (a pretty modest one space for 5 beds) can’t be met at an existing location. Hess himself argues that, at a minimum, the proposed modified to exclude General Commercial and Commercial Manufacturing Zone districts (in part to, as he put it, “preserve our commercial areas for retail/commercial uses and the benefits to the City these types of uses provide to help pay for on-going costs”.

The ordinance is not coming up before the City Council on Tuesday and it is not clear at this time when the Council will decide the issue. One objection that Hess raised was that there was no notice to the neighbors of the affected areas, which is frankly unacceptable. The City Council should ensure that adjacent property owners are given notice of the zoning change so they have an opportunity to speak if they wish to.