By Making Sure They Have Less Money to Spend

There are few things harder than trying to prioritize your spending. This is easily evidenced by the new law which is slated to bring in “much needed” transportation funds to fix our ailing infrastructure and yet amazingly has close to the same price-tag as Jerry Brown’s Bullet Train to Nowhere. The train is currently slated to cost $68Billion while the new tax will bring in $52Billion over 10 years. If we stopped the Brown’s Folly we would be able to pay for our infrastructure but alas those whacked priorities in Sacramento.

Enter Josh Newman (D. 29th State Senate District) & Sharon Quirk-Silva (D. Assembly District 65) to save us from the grief of budgets and the balancing acts that follow. They both surely read the study that claims that poverty taxes the brain and are thus worried about the poorest amongst us. What better way to make sure the poor can make fewer bad decisions than by pricing them out of those very decisions?

This is an act of benevolence on the part of our elected betters. Nay! An act of sheer mercy. We tried shaming you out of going to McDonald’s so now we’ll just increase prices so you can no longer afford it.

Of course this new tax increase has led to a flurry of interest and even the call for recalls. However we would all be remiss if we didn’t give credit where credit is due. We should acknowledge that Newman & Quirk-Silva, along with their (D) allies such as Senator Anthony Canella, have finally found a way to try to balance the budget on the backs of everybody as opposed to simply taxing “The Rich™” or “The 1%™”.

The rich will certainly be hurt by Newman and Quirk-Silva’s $100/year tax on zero emission cars that doesn’t go into affect until 2020 (with the gas taxes going into effect this coming November and the increase in the vehicle license fees next year). However even if the zero emission fees were immediate the $100/year isn’t so bad owing to the heavily subsidized nature of Teslas & other zero emission car sales in the first place. It could take up to 70 years before the rich will have paid back that subsidy $100 at a time.

No, this new tax is first and foremost a tax on the poor. After all of these years of saying that people need to pay their “fair share” of taxes the (D)s finally approved a bill that further socks it to the poor in a way they can’t escape. While quite a bit of ink has and will be spilled on both inflation-adjusted taxes which include the increase of $0.12/gallon on fuel and $38/year in registration fees less ink has been spilled on the $0.20/gallon diesel excise tax increase or the $0.04 increase in the sales tax on diesel fuel.

Those two diesel tidbits will hurt the poor the worst because diesel fuel is largely what powers our economy. Nearly everything you buy from the store got there via diesel power be it on the diesel powered trains or trucks that pull things from the ports or the diesel powered trucks that deliver to your favorite retailer or fast-food joint. Higher fuel prices means higher transportation costs which means higher prices at retail to cover those costs.

This is basic Econ101 stuff so of course I don’t expect our electeds to understand how it works but I’ll illustrate.

Everything we do will be effected by the increased costs that this bill will throw at the economy in ways that have yet to even be discussed and those costs will mostly be born hardest by the poorest among us. That’s because the poor have less disposable income with which to absorb all of these higher costs. If you live the high life rubbing elbows with the bourgeoisie in Sacramento chances are good you didn’t even pick up the tab and don’t know what things actually cost. Even if you do know the cost you aren’t effected by the price thanks to your government salary/benefits.

If, however, you’re one of the 15.3% of Californians who currently live in poverty you’re not so lucky.

The added costs of all of these new taxes will likely be more than our poorer families can afford to spend on Christmas for their kids. The added costs to everything will eat into the income of our older fixed-income residents which means they can finally choose which medications they want to buy. They’ll do what all taxes do and make businesses either raise prices or cut expenses thereby risking hurting our already bad labor-participation rates. With less available jobs our Veterans will have fewer places to stress about applying for work. Heck, even the illegal immigrants that Josh Newman & Senate Pro-Tem Kevin de Leon are so proud of will be hurt as all agriculture businesses will have to pay more to run their farm equipment and trucks that process and deliver all of our food. 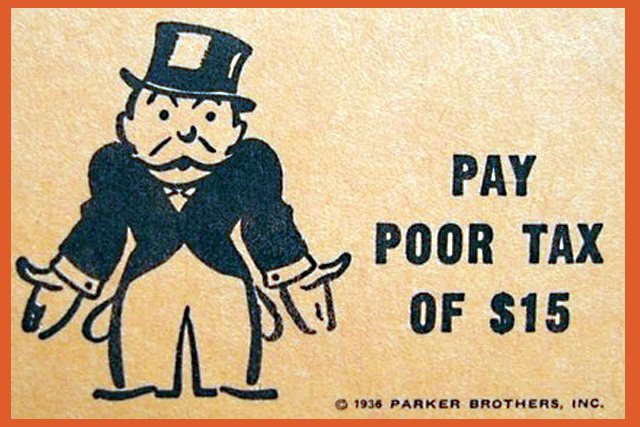 The great central planners all want us to walk, bike and use public transit more. They want us to escape our cars and trucks but we can’t escape the way we cart our goods around the state and country, not yet at least, and therefore this is a truly inescapable tax.

For once the (D)s have found a way to use their malfeasance to stick it to the poor in a fashion that they only wish they could pin on the (R)s. They’re proud of it to boot. 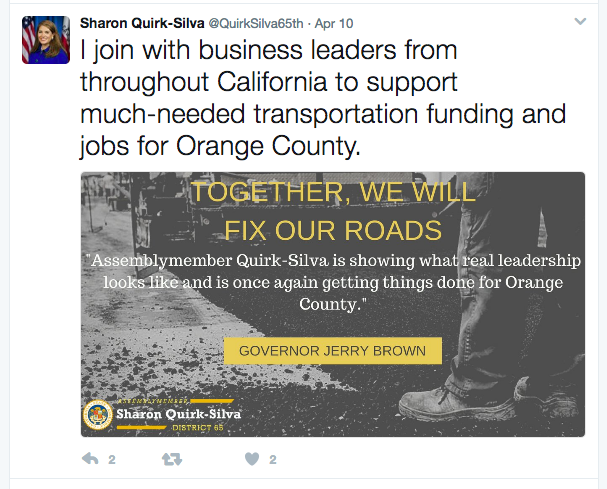