Looking Askance at the “Need” Argument

The City of Fullerton is the process, through the planning commission, of bringing another abomination of a project back to life. What was once “Amerige Court” will now be “Amerige Commons”.

The key reason that the Amerige Commons project is being resurrected is because we allegedly need it. Need being the operative word thanks to our supposed housing and retail shortfall. Or so says the city. Again. Again. And yet again. I’m starting to wonder what the word need even means anymore in this town. Or any town for that matter.

City folk say that our residential vacancy rate is X% and to the city that alone correlates need. In a market economy you would look at what’s selling and adjust to reflect the market. Therefore if single family homes are the fastest sellers you would work to build more single family homes. If you wanted to court a younger population you would build in their price-range. However we’re talking about government and not a market economy and in this case the only sales that matter are the votes of our council members and the developers locked most of those sales up years ago.

If we take the city planners seriously we are forced to focus on the need issue so what do we really need here in Fullerton?

Housing need is a sticky wicket thanks to the ownership v. rental issue and the actual goals for a town. The rental aspect alone complicates things owing to the number of available units, price and desirability of planned units. None of which is independently verified by the city. If Essex Properties tells Fullerton officials that they have 5% capacity available the city takes them at their word and hands them City Pointe. Short-Term-Rentals such as AirBnB, which the city is contemplating codes upon, will further impact this issue in unknown ways.

Regarding need specifically in the home ownership realm the need in Fullerton seems to be the adorable little houses in/around Downtown. This is why a 2bd, 1bth house can sell for over $500,000.

Let us ignore government manipulations in the housing market such as Fannie Mae / Freddie Mac and pretend that the market is working. Even if we concede that houses in Fullerton are super-expensive and thus indicative of a market need we never talk about building affordable options. We talk of houses in Coyote Hills which will be homogenized McMansions or the 3 houses built by Habitat for Humanity for which almost nobody can qualify to buy. If we tried to build smaller, or micro-housing to really attempt to satiate the need component for affordable housing the owners of said McMansions would pitch a fit. After all it might cause their property values to drop ever so slightly. Even on the “wrong” side of town.

The argument here is that nobody is building those houses any longer so need as defined by the market cannot be satiated. Thus we instead build Condos or McMansions on the North & West sides of town and Apartments/Condos everywhere else.

But isn’t this simply a fallacy of government distortions? While it is likely correct that a big developer won’t build those cute little houses anymore the theory hasn’t really been tested. When we look at the most desirable houses in and around Fullerton we find that many of them were built pre-WWII in an era where building codes simply didn’t exist. Some of the houses were built with plans and materials from catalog companies such as Sears-Roebuck. If you wanted to buy a house like that or build one I promise you that the city would put a stop to it. The permitting alone would probably bankrupt you. Even if we were to adjust the plans for modern issues such as Earthquake readiness it would be unlikely to pass muster. Which is laughable when you realize that these pre-bureaucracy houses are still standing and very desired.

If you complain that we dedicate too much space to rentals/condos with a commercial component you’ll run into the square footage argument. Some city & development minded folks will cite the amount of square footage dedicated to houses versus apartments to show how much of each we build. This is disingenuous nonsense owing to the aforementioned McMansions. When you have single home lots that run in the size of acres, plural, you can’t equate that to an apartment complex that uses a lot 1/3 the size.

This means that what we need based upon the market for what people want in housing isn’t going to get fixed.

The other component here is that if we build it, they will come thereby distorting the need argument. If we build housing for all of C.S.U.F.’s 35,000 students they could all live in town. As could the students at Hope International and the other colleges. Yet just because more people want to live in Fullerton doesn’t mean that they all should live in Fullerton. Pretty soon the well will run dry on available land and all of the reasons people love this town will cease to exist.

Now what about commercial need though? Do we need more “mixed-use” commercial spaces?

Every project in the city that is colloquially referred to as Mixed-Use is simply an apartment (or Condo) development with a ground floor commercial component. When I think Mixed-Use I think 1940s style usage where a business might sit between two apartments on the same floor and such is decidedly not the case with these developments.

Let us look at a Planning Commission Study Session slide for reference: 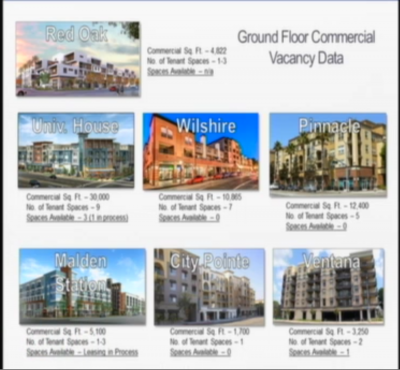 It shows 6 mixed-use complexes and their ground floor commercial vacancies. Reading the screenshot is difficult so I’ll outline it:

This information was outlined during the pitch for the proposed Red Oak property at 600 W. Commonwealth. That project will have a mixed-use component on the front parcel but both parcels will be re-zoned mixed-use. Because reasons. And Need.

Keeping that in mind I drove passed Malden Station and it appears the leasing process is still processing. In other words the 5,000sft of retail space remains empty. Malden Station has been open for a while now, 2 years if City Council minutes are to be believed. Adding in the actual construction one wonders why it’s taking so long to find folks to lease the properties. Especially considering our constantly reiterated need. 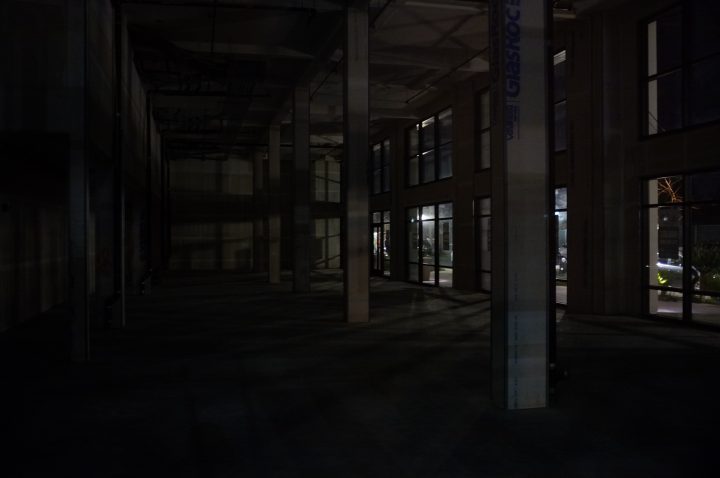 We lost industrial space for this empty need. We’re gaining traffic and congestion thanks to this need. But maybe, perhaps, this need isn’t really a need. Because in a market economy the developer would have had people lined up for this space before opening. How can they afford for it to sit empty for so long one wonders.

Regarding Malden Station we’ll continue to wait and see what will sit in this location. Will we get more of the same chains like Jersey Mike’s & Oggi’s under University House? Surely nothing screams Fullerton like having the same look and businesses as every town in America. Or will we get a liquor and lotto emporium such as sits under Wilshire Promenade? Maybe we’ll score a cliché like Be Well Pharmacy which is the only business currently operating under the age-limited 55+ complex Ventana.

Perhaps we’ll get lucky and we’ll get another bar in this space because that’s what Fullerton really needs. Especially in the “SOCO District”.

Before we build more empty or overpriced nonsense in the name of theoretical need we should first talk about what we want and adjust said need accordingly.