And My Field-trip to Fact-Check Red Oak Investments

This coming Tuesday the Fullerton City Council has a packed agenda and the most noise I’ve heard over the agenda is regarding the Red Oak Development. For the uninitiated that is the “Mixed-Use” Apartment complex that is being proposed at 600 W. Commonwealth where the Chevy dealership once sat.

I’ve written about this project elsewhere but I really want to dive into some of the rhetoric of Red Oak Investments.

When this project was in front of the planning commission back in September the spokesman for Red Oak, Alex Wong said the following:

“This project creates rich, new open spaces that are usable and accessible by the public. The courtyard on Chestnut is very similar in dimension and character to the charming courtyard that is in front of the Dripp Cafe and Stadtgarten. Very similar situation but twin courtyards that match each other on both sides of Williamson are coincidentally are very similar to the situation we have at Wilshire and Pomona, the plaza by the museum. And those are really special spaces. This is a private development but it is proposing to create public spaces that are usable both the people that live there and people who are also in the neighborhood whether they’re working or living there.”

I almost fell out of my chair laughing at this comment and spoke up in the public comments that these “public courtyards” wouldn’t stay public. I also called out the fact that the “open courtyard” at Stadtgarten is behind a wall and through a private entrance which isn’t exactly public nor open. This was false advertising at best and deceptive at worst.

Mr. Wong was allowed to respond as these meetings are always tilted in the favor of the developers and he responded with the following:

“I’d like to respond to a couple [comments]. Joshua Ferguson, the guy who lived at Wilshire Promenade and talked about the courtyards not lasting long there when it’s open. There’s something about what he said that I think, that has a kernel in reality. This is not the typical way of doing a project. We will be making a case to investors and to our management company that hey this is going to be different than the other 99% of the portfolio that you manage. But we’re doing it because it’s better and we’re really excited about the concept. It is unusual.

“I can only think of three places in recent memory that have even tried this. Two of them are condos, different kinds of projects. They happen to be in Santa Ana; Artist’s Village and the one by the station. I forgot what it’s called. Only one of them is a rental and that is Westgate in Pasadena. It is the flagship project next to Old Pasadena. Old Pasadena has a very visible homeless presence and Old Pasadena is a slightly larger and a denser downtown than we have here. But that, coincidentally, was designed by the same architectural company and has these open courtyards and stoop locations in a few places but it does have open courtyards.”

Mr. Wong & the City of Fullerton clearly think that we’re intellectually lazy and too stupid to ask questions or verify details. They apparently think that we can all be won over by platitudes and arguments that fall apart when applied evenly across the board. Allow me to explain.

Let us begin with Old Pasadena being “slightly larger and denser”. Bollocks.

Slightly larger perhaps if you’re sizing up Downtown Fullerton the way the City always wants to do when they’re talking about collecting new taxes. Denser? Huge difference. Let’s compare that Old Pasadena Map to the painfully old one on the City of Fullerton’s website: 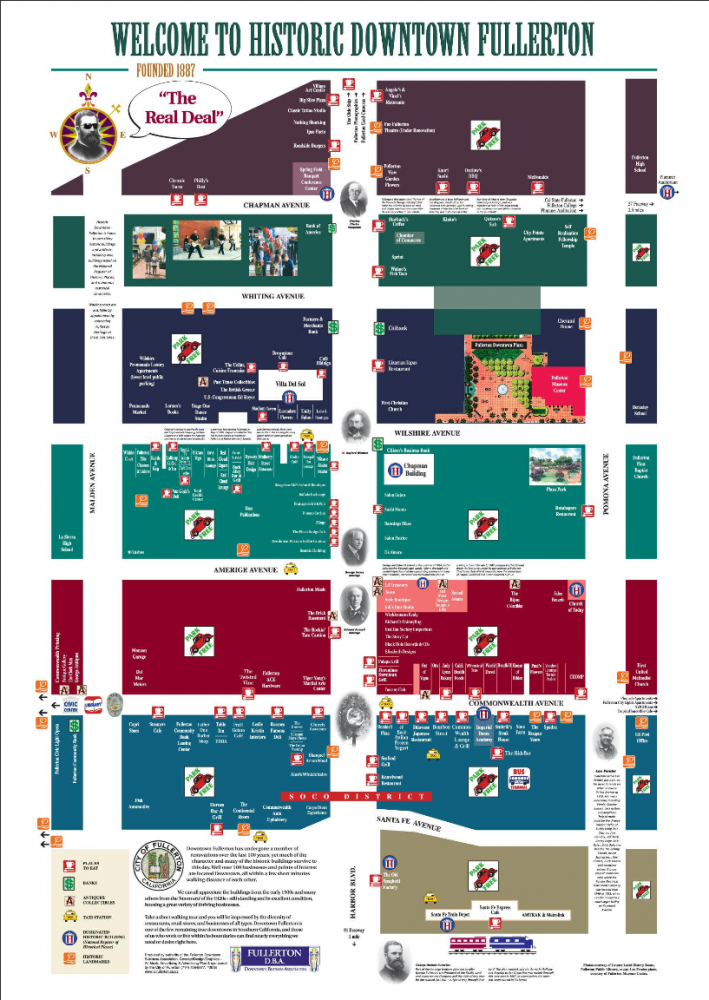 The Westgate Apartment complex (area highlighted in Orange) itself covers 0.3 of a mile unto itself. To put that into context the entire length of Downtown Fullerton from Malden to Pomona is only 0.4 miles long. That apartment complex could cover most of our “slightly smaller” downtown.

With that understatement out of the way let us now focus on Mr. Wong’s careful nuance. When he stated that the Westgate Apartment is “the flastship project” of this type he neglected to state that Red Oak had nothing to do with Westgate. That is an 800+ unit Development that sits on 12 acres of land. It’s a giant monster of a project sitting on land that is 3 times the size of the property that the Chevy dealership used to occupy. Again, it’s the size of our downtown.

It also doesn’t have much in the way of open space or courtyards as they’re thought of in the traditional sense. I know this to be true because I went and checked for myself. Here is the only thing that could remotely be called an open courtyard: 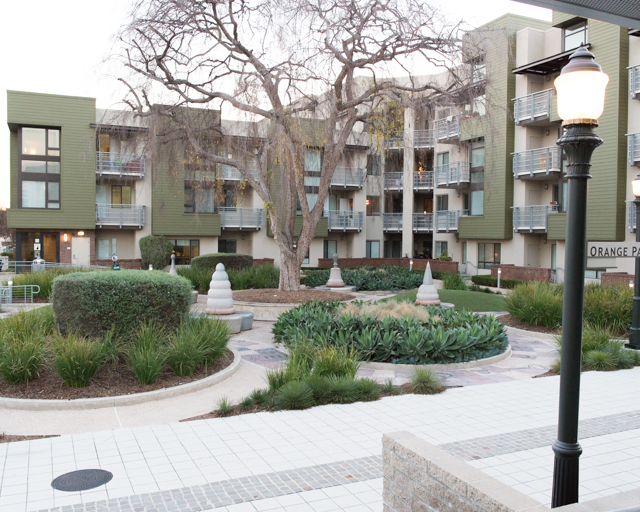 There’s not much to admire about that there flagship.

I figured that couldn’t be it so I walked the entire complex and the closest thing to public courtyards or “open space” was the walkways between the building. Such as: 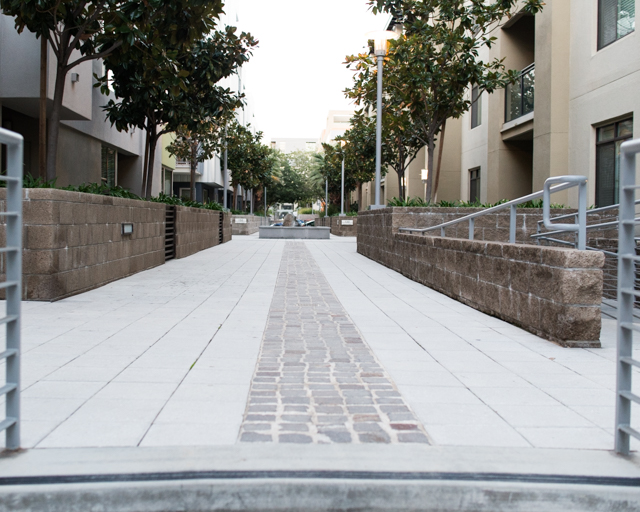 As would be expected everything else was behind locked doors and closed gates. Just like I said it all would be in any community that didn’t want to piss off its residents. I dare them to add the pool tables that Red Oak is proposing in our little town.

One amusing point about the Westgate Complex is that their largest piece of retail space, on the corner lot, has been sitting empty for over 3 years.

So even in this slightly denser area at this flagship location obtaining commercial tenants is a problem. I wonder how the commercial occupancy will pan out for 600 W. Commonwealth.

I guess we’ll have to ask Malden Station to sort that problem out for us… oh wait.

It really does get better though.

You see, I had to go to Pasadena two days in a row for this little field trip because I went to the wrong complex the first time. When Mr. Wong kept referencing Pasadena, in other comments and meetings, I missed the nuance and looked at Red Oak Investments for properties in Pasadena. That led me to Trio which is an apartment complex in Pasadena that they actually did build.

As an aside I would like to mention that I don’t trust anybody who’s website is fully flash based and auto-loads music as though it’s 1998.

It wasn’t until I was transcribing Mr. Wong’s comments for this post last night that I caught the name of the Pasadena flagship he referenced, the Westgate. I mistakenly had gone to Trio:

This property has pretty miserable reviews on Yelp and elsewhere (2.5 stars or below) and apparently has been through 4 or so management companies in the short time it’s been open. The elevators don’t seem to work well based on those reviews so that’s a fun walkable design idea. While the commercial component is full the property sits on Colorado Blvd and a block from the Pasadena Playhouse. I’m not giving brownie points for filling prime real estate.

My favorite part of the Trio complex was their version of open space and a courtyard. Much like Stadtgarten in Fullerton the only real open space is private property for a restaurant which is mostly brick enclosed. The next closest open space was the walkway between Trio and Bank of the West. Here’s a photo:

The Bank of the West side has benches. The Trio side has concrete slabs you could sit on if so inclined.

I’m not excited by Red Oak Development because they’re trying to sell us something that they didn’t build (Westgate) while their own local project is lacking. They’re promising amazing when they’ve previously delivered mediocrity. That 99% of most portfolios don’t have these projects isn’t a reason to do one or to not do one, it’s a reason to be cautious about taking the risk. I don’t believe 600 W. Commonwealth is the site for this type of project because if an area like Old Pasadena can’t (or won’t) support this “better” idea I’m not sure it holds up for Fullerton.

To further complicate this project it should be noted that this complex is viewed by the City as a walkable project. Well, that’s interesting because recently I went on a walk of Downtown Fullerton with Karen Haluza; Fullerton’s Director of Community Development. She was nice and eager to hear my complaints about some of the plans that were percolating in the city. She wanted to explain what she saw as issues and hoped to hear solutions from me. To be fair I didn’t proffer many solutions because, as I told her, I have little interest in solving the problems of 6-figure salaried government employees.

I tried to stress that the city needs to get it’s municipal code in order and to stop playing favorites. Too many people have simply had it with handouts like what happened with the missing sidewalk at Tuscany. The big take away for me was that people are lazy in regards to parking which is true. Far too many people won’t park in a structure and walk two blocks to the bars and instead will circle the Amerige lots hoping to get lucky both in parking and otherwise. I’ve seen this time and again and I don’t disagree with the sentiment.

But here’s the problem with that bit of information. The City planners cannot simply wave a magic wand and nudge people to be more active. If we need to worry less about parking owing to availability and laziness we should also realize that if people won’t walk two blocks from a structure they surely won’t walk a mile round-trip from 600 W. Commonwealth.

Perhaps the city plans to dredge the Street Car out of the trash bin of bad ideas or cross-promote this development with Uber but walkable is not an apt descriptor for this project. If the city tries to nudge people to walk more and drive less they’re going to learn that markets serve wants and another town will build more parking to get them as customers. We should be planning for today and the wants and needs of today with an eye towards the future instead of planning for a future that might never arrive.