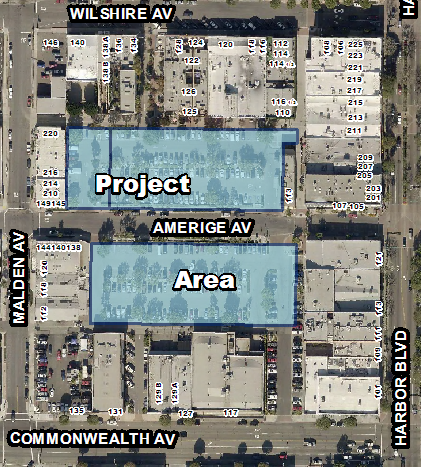 The plus side, at the time of inception anyways, was that it would provide Downtown with 150% of the parking that was (and is) currently available with the downside being every other aspect of this plan. When people got wind of it the city pushed the plan into a “Study Session” where it was cut down from 9 stories to a more reasonable size and the 150% parking requirement was nixed because why not take the only good thing away from the plan.

Time went on and nothing happened and there are many reasons why the plan didn’t go through which I won’t go into but suffice it to say the city of Fullerton is trying to bring this zombie of a plan back to life after 4 years of the City Council Extending the plans for the developer (which has changed). The last time around it was Sebourn who brought the motion to the floor, Fitzgerald seconded it and the vote passed 4-0-1 with Chaffee and Flory in support and Whitaker abstaining for those keeping score at home.

The new monster, now being called Amerige Commons is the basically same train-wreck with a worse name.

The recent feedback session that Jane Rands goes over in detail at The Observer, which I won’t link to because she suspiciously divorced my name from my comments, was a joke because people essentially gave the same complaints that were given year and year out when this plan was originally rolling through the system. No answers were given and no plans were shown. I even made the point to the Senior City Planner, Matt Foulkes, that perhaps the city should do their homework and show up prepared before holding one of these farce meetings.

The problems are simple. For starters the construction is going to be a business killer for the businesses that are currently using those parking lots. The “Restaurant Overlay District” and the special handouts given to special businesses has already made it nearly impossible to park in this area of Fullerton after 6pm on any given day and this will simply destroy the parking. I find it hard to fathom that anybody is going to park two blocks away to walk to the retail shops, coffee shop, hair salons, Ace Hardware, yoga studio and other businesses that rely on actual customers to stay in business. Being that the city relies on taxes, which citizens cannot avoid, to stay alive they don’t seem to understand the simple concept of location, location, location (which always includes parking).

But when it’s done it’ll provide the same parking to the local businesses that manage to stick around so no harm, no foul, right?

Remember as I mentioned above that this new Mixed-Use building will be in the “Restaurant Overlay District”, which I brought up at the recent meeting on this project, meaning that if the developer decides to put eateries in the commercial component of the project they wouldn’t be required to have adequate or additional parking for the restaurant patrons further eating into the available parking.

Also, this 144-unit building will likely be parked at about or less than 2-spots per unit which means it’ll eat street parking as residents scramble to find parking at night when they get home which already happens thanks to the under-parked rentals from the Wilshire Promenade out Westward to Highland Avenue.

As we can see from the Study Session, on 28 September 2016, most of the Mixed-Use buildings in Fullerton are parked at less than 2 spaces per unit and the city only has anecdotal evidence that they’re adequately parked for the residents. My anecdotal evidence of living on Wilshire Avenue for 6 years trumps the City Engineering Department walking the street one afternoon and I say that the complexes are not parked adequately. 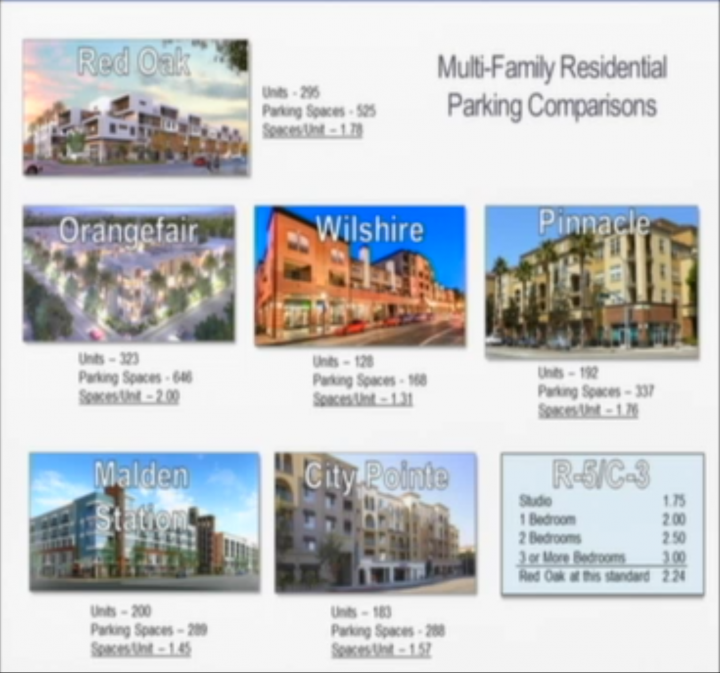 Please excuse the poor photo, it’s a screen-grab from the video on the Planning Commission Study Session as I couldn’t find a better version. It states the following in regards to parking; Red Oak: 1.78/Unit, Orangefair: 2/Unit, Wilshire: 1.31/Unit, Pinnacle: 1.76/Unit, Malden Station: 1.45/Unit, City Pointe: 1.57/Unit (an average of 1.66/Unit for parking spaces over these 6 complexes).

The City’s Community Development Director, Karen Haluza, mentioned in her presentation during the recent study session, the population growth of Fullerton and our need for new housing but nowhere in her presentation did she really break down the logistics of how our city works. I’ll give an example of my complaint to go with her numbers. We have a population of approximately 145,000 people according to her numbers and therefore the argument is that we need more housing but how many of that 145,000 are C.S.U.F. students currently renting for the sake of college?  Considering that C.S.U.F. has a student population of nearly 39,000 students with 98% living off campus it should go to point that a good number are renting in the many mixed-use developments currently built in and around our town with particular emphasis on those near C.S.U.F. itself followed by downtown. This doesn’t even factor in Fullerton College, Hope International or any other similar temporary resident draw.

No planning study of Fullerton is complete without noting the huge impact the local colleges have on our rental markets and therefore our housing market as more and more houses transition from single family homes to rental properties over the years in order to capitalize on this issue. (Just wait and watch how Short-Term Rentals further exacerbate this particular problem for people looking to own a home).

I’m not an anti-development guy but this is an idiotic development plan. It’s picking a developer to be a winner while making all of the local businesses that actually make up this part of Downtown Fullerton losers because we know that Fullerton doesn’t know how to plan for the convenience of anybody but the developers (see the cases of the missing sidewalks for examples). 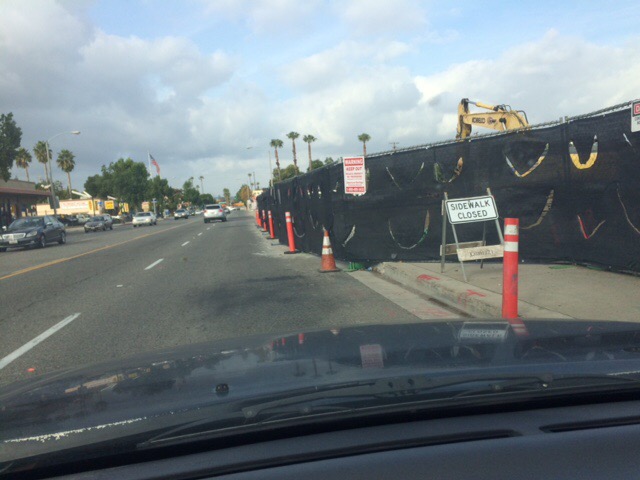