A few weeks ago we told you all about the Fullerton Police Department’s attempt to protect the city’s tow monopoly through harassment of AAA tow truck drivers. 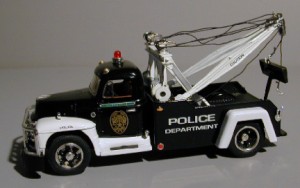 Now the OC Weekly is reporting that a suit has been filed against the FPD claiming that police officers harassed and intimidated tow truck drivers for competing against the city’s preferred tow vendor. 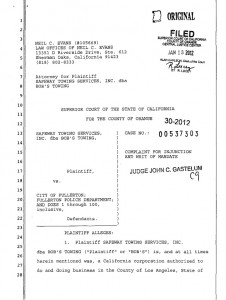 The suit alleges that drivers from a Bob’s Towing were singled out and cited over 40 times for frivolous reasons while other companies’ drivers went untouched.  Officers Hagen and Ledbetter are accused of turning off their audio recorders for “off the record” conversations constituting harassment. Drivers have quit and left the city in fear.

Is the FPD violating these folks’ constitutional right to equal treatment under the law? That seems to be par for the course.

Of course, if the PD has been systematically denying it’s own citizens the benefits of fair competition, then this has undoubtedly caused drivers to be left stranded while AAA scrambles to find tow truck drivers willing to face the FPD.

And then there’s that big question we keep having to ask: Can a single month go by without the FPD drawing taxpayers into a major lawsuit?

107 Replies to “Tow Racket Leads to Yet Another FPD Lawsuit”