Or to be more precise, Loretta Sanchez has one and is sharing it with Quirk in the latter’s campaign for the 65th State Assembly seat. The location is 1660 West Lincoln Avenue, in Anaheim, and according to a Quirk supporter is part of a master plan – a message to the hard-working families of west Anaheim that legislative help is on the way – Sharon Quirk style.

The liberal OC blogs had announced a grand opening party for Sunday, 1:00 to 3:00 pm and one of our Anaheim Friends, lured by the possibility of free drinks and snacks, took a spin by HQ for the advertised open house. It was scheduled from 1:00 to 3:00.

Unfortunately our Friend says he didn’t get there until a little after 3:00. And guess what?

“I motored by at 3:10 or so. The place was a ghost town. That party was either cancelled or cleared out faster than you-know-what through a goose. I did snap a pic. 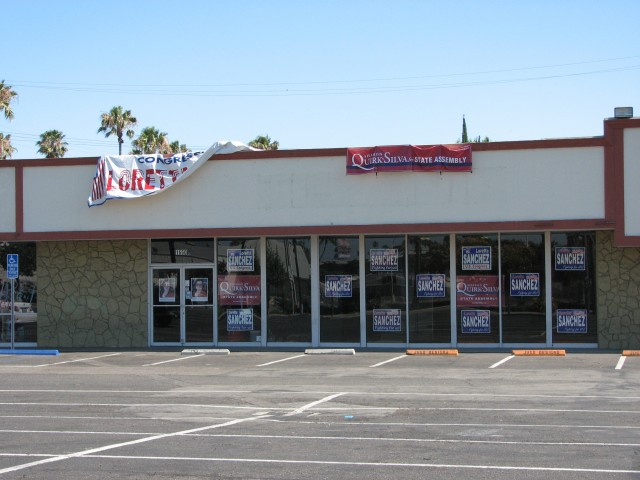 For some reason Sanchez and Quirk rented a place next to The Chain Reaction, an Anaheim night spot whose notorious parking problems and near-nightly events will wreak havoc on running a campaign office.

Anyway, we in Anaheim are likely stuck with Sanchez. But you in Fullerton can keep Quirk.”

27 Replies to “Sharon Quirk Has A Headquarters. Sort Of.”