Reflecting on the FPD career of Albert Rincon, the man accused of serially sexually assaulting women in the back of his patrol car, made me think about the creep that hired him, and the standards that were applied to the recruit.

We have seen from the facebook page of “Albey Al” a preening, self-absorbed, utterly shallow weasel. Okay that’s bad enough. What makes Albey Al Rincon’s presence on the Fullerton police force even more revealing is the virtual illiteracy of a grown man who can not spell, let alone write complete or even intelligible sentences. This begs the question of what sort of standards Pat McKinley applied to his recruits. After all, he hired Rincon, just like all the others. 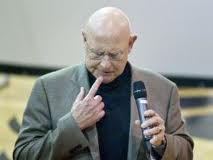 Clearly, being a narcissistic megalomaniac was not an impediment to Rincon’s employment, and why should it have been? McKinley himself fits this profile. And let’s not forget how McKinley himself excused Rincon’s sexual battery: “it ain’t a dangerous thing.”

But are there no basic academic qualifications required to be a Fullerton cop?  Apparently not.

Narcissism and ignorance are a bad combination, and the complete lack of moral scruples rounds out the McKinley recruit profile. Now give ’em a badge and a gun and let ’em hit the streets of Fullerton! McKinley has yet to disavow Rincon as some sort of “alien;” and why should he? They are kindred spirits.

McKinley set the FPD bar so low that even a morally vacuous, messed up ignoramus like Albert Rincon could slither over it.  Despite the pleas from FPD apologists about all the good cops employed by the department, we are justified to question that claim, given the mere presence of Rincon on the force; somebody thought he was not only fit for duty, but that he deserved to stay on duty after all the charges leveled against him.

The really dangerous thing is that the FPD and anti-recall crew don’t want us to talk about Rincon. Or Mater. Or Major, or Mejia, or Hampton, or Thayer, or Tong, or Baughman, or Nguyen, or Solario, or Siliceo, or any of the other police department employees who have given the City a series of black eyes. They want the public to think that a couple cops maybe, just maybe, got a little over-excited one hot night last July, and that Kelly Thomas’ death is a lone example of miscreance being exploited for political purposes.

Well, despite Acting Chief Hughes protestations, there has been and still is a Culture of Corruption in the FPD. The fact is that McKinley’s twisted chickens are finally coming home to roost. The repercussions will be prolonged and painful, emotionally and economically. But after June 5th McKinley will just be an noxious footnote in Fullerton’s history. The clean up will take a while.