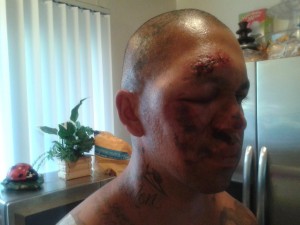 I don’t know. That’s his story, anyway, and because he has a lot of gang tats and an old affiliation with a Fullerton barrio gang, his story is sure to be challenged.

On August 11th, Fullerton resident David Tovar  was riding his bike on Valencia Ave. when an unknown truck sped up behind him.  Fearing for his safety from the unknown persons in the vehicle, Tovar veered off. The truck chased him down an alley just east of Harbor Boulevard, and then across Harbor and rammed him from behind. He was knocked him off his bike, his head striking the concrete curb. He was unconscious. He later discovered that the driver and passengers were undercover Fullerton cops in an unmarked car who pursued him because he had no light on his bike!

Here’s an interview with Tovar.

Naturally, we here at the FFFF City Desk, are in hot pursuit of any witnesses, so stay tuned! If anybody in the vicinity of Harbor Blvd. and Ash Ave. on August 11th saw this incident, we would like to get your story.

We will also be inquiring about any such event logged in by the FPD and see if any of this story might be true.

432 Replies to “Did David Tovar Get Messed Up By Fullerton Cops?”