Believe it or not, Acting Chief Dan Hughes, the alleged “reform” chief the Fullerton Police Department needs so desperately seems to the beneficiary of a campaign – to have himself appointed Chief permanently. 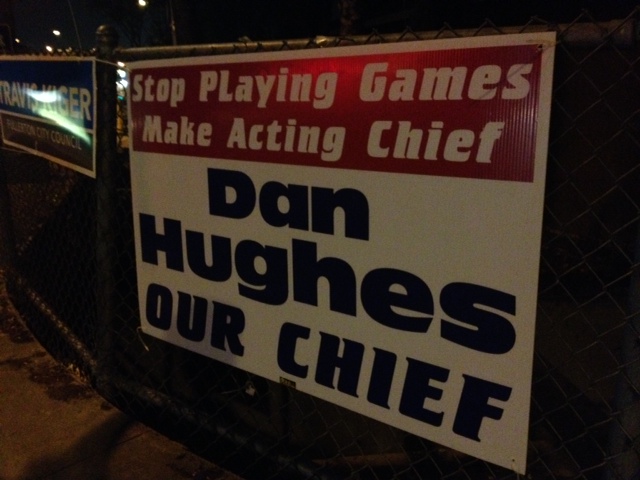 So who’s playing games? Is it our amiable Acting Chief who seems to have zero control over his badged and armed goons?

Or perhaps it is the greasy little mole Doug Chaffee who decided to agendize the issue of giving Hughes the job even though the council majority has stated that it wants to do a recruitment to get the best candidate for the job. Nice job politicizing a personnel appointment.

Now I don’t know about you, but I believe the appointment of Hughes to permanently take over the cesspool would be pretty bad. The Old Guard would dearly love the voters of Fullerton to think the Kelly Thomas murder was a weird one-off, something that can never happen again because Rusty Kennedy has taught the poor, unwitting Fullerton cops how to deal with the mentally ill homeless population.

Um, not so fast, Mrs. Flory. Please explain the following personnel issues and embarrassing events that have occurred under the rancid regime of which Acting Chief Danny has been a lead player:

1) Erroneous raid on Robin Nordell’s home. No apology for a year.

8) Albert Rincon sexually assaults as many as a dozen women in his custody; civil suit settled by two victims for $350,000.

9) Vince Mater charged by DA with destruction of evidence after the jailhouse suicide of Dean Gochenour.

10) April Baughman arrested for ripping off the FPD evidence room for a period of years. Where is the accomplice? Who was taking inventory? Such things are not for us to know.

11) City sued again – by Edward Quinonez who alleges he was accosted and falsely arrested by – Kenton Hampton. What a multi-tasker!

13) DA charges Manuel Ramos, Joe Wolfe and Jay Cicinelli in the death of Kelly Thomas; Hughes lets them view video, re-write reports, pats all on back, handshakes all around and lets them stay on streets.

14) Danny says he’s watched video 400 times; says it will give public the real story (he is right).

15) Danny says those who perceive a Culture of Corruption are liars or ignorant.

16) Permit Internal Affairs Sergeant Jason Sheen to bring a bong into the council chamber for demonstration in front of kiddie soccer players.

I don’t know about you, but I have seen as much of Acting Chief Danny as I care to. It’s obvious this man is a congenial glad-hander. But he is inextricably entangled in the Culture of Corruption with absolutely no interest in recognizing  past FPD malfeasance, let alone atoning for it.

Just as bad, it is clear from recent events that he has absolutely no control, or no interest in controlling his employees.