Now we’re getting some traction. The story of a homeless man beaten to death by the Fullerton police seems to be attracting some significant attention outside of our own little town.

Across the pond in the Daily Mail (72 million monthly readers)
Caught on tape: Police beat and taser ‘gentle’ mentally-ill homeless man to death

I’ll keep this post up to date as coverage expands. 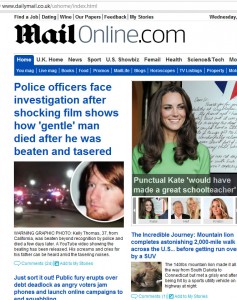