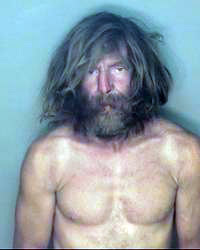 This image was included in a story at Fullerton Stories here and purports to be a 2009 police booking photo of recent Fullerton homicide victim Kelly Thomas that was, presumably, provided by the ever helpful FPD spokehole Andrew Goodrich. Well, this is certainly a scary looking dude: pretty buff and mangy, and sufficiently angry-looking to scare the good folks of Fullerton right back into complacency about the homicide of a mentally-ill homeless man.

The only trouble is that it isn’t Kelly Thomas at all. His parents say this isn’t their son. But we don’t need their expert opinion. Apart from a large nose that is completely different from every other picture of Thomas, Kelly’s hair was flaming red, a simple fact illustrated in every other picture of him in the Fullerton Stories piece.

So what gives? Is this just a cheapjack trick by Goodrich & Co. to degrade the victim by presenting Kelly Thomas as a surly, muscular threat to Fullerton’s delicate residents? If so, the Fullerton Police Department has actually hit a new low, and given recent events that’s pretty goddam hard for them to do. But it’s just when you think you’ve hit the FPD basement you find out there are even lower levels.

I will await a comical explanation from the Good Sergeant Goodrich, but of course I won’t be holding my breath.

69 Replies to “A Case of Mistaken Identity? Yeah, Right.”