The other day FFFF received this rather odd comment on the blog:

“Thanks for risking your lives so that my family and I can enjoy OURS!”
– Joel Swintowski

There were links to a website here that sported an official-looking letter from Fullerton’s police officer’s union president, Barry Coffman asking for money. There was the quote from Mr. Swintowski, clearly implying that he supports the Fullerton police union.

I got to wondering who this Joel Swintowski person might be. I never heard of him. So last night I contacted our FFFF  investigative team of people-finders and guess what they came up with? There’s no such registered voter in Fullerton or in all of Orange County with any such name.

But, as they say on TV infomercials: Wait! There’s more! I also found a host of identical websites for police unions across California with the same quote from this “Joel Swintowski” guy. Clearly this operation is a money gathering scheme organized by some entity and then sold to police unions throughout the state like this one in Menlo Park, probably with a hefty cut taken from proceeds collected from unsuspecting suckers.

Now back to Fullerton. Coffman says it’s a “donation” that he’s begging. The request for money states: “Your contribution to us today will help provide outreach and strengthen relations by and between the FPOA and several local worthy groups and charities.”

Now we know the FPOA spends tens of thousands of dollars trying to get right-thinking people elected to the Fullerton City Council. And by right-thinking, I mean “public safety” union stooges who will raise their pensions and lower their retirement age.  Do any of these “contributions” find their way into political activity? Could be. They are not tax deductible – the kind of deduction you get making a contribution directly to a real charity, eliminating the pistol-packin’ middleman.

So who might some of these “worthy” recipients be? Any guesses? 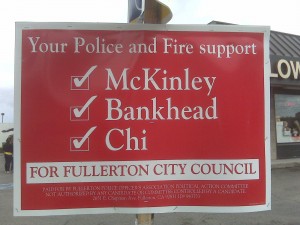 Could they include the campaigns of the same two guys, Bankhead and McKinley, who are getting prepared to raise your water rates 91% so they can use a portion of that money to support their own plush $McMillion retirement plans?

Maybe it’s time for an IRS audit of this solicitation for alms. Maybe the State AG needs to be called in, again. You know, just to make sure it’s legit.

And in the meantime maybe it’s time for FPOA to find a real Fullerton resident for its self-promotional testimonials.

22 Replies to ““Joel Swintowski”: Who is He? What Is He Promoting?”