Earlier we discovered a federal civil trial against the Fullerton PD and one of its cops named Albert Rincon, alleging that he serially sexually assaulted women in the backseat of his squad car. Since then, several interesting pieces of evidence have come forth.

That evidence shows how the FPD’s internal affairs department worked in tandem with a DA’s office that won’t prosecute cops, in order to derail an internal investigation against one of their own.

1. Receive graphically detailed allegations that one of your officers had sexually assaulted a female in the back of his squad car.

2.  Ask the DA to “investigate” to see if a crime had taken place. 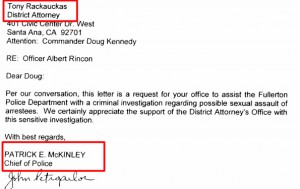 3. The DA investigator finds five more women who say they were sexually groped, penetrated or propositioned in the course of an arrest by Rincon.

4. Listen to the recordings and discover that the cop’s audio recorder was turned off just before every single alleged assault took place.

5. Despite an astounding number of victims and witnesses, Tony Rackauckas’ office declines to prosecute the cop for sexual assault.

6. Pretend you don’t know why the DA didn’t file charges. In fact, don’t even ask.

7. Let the Internal Affairs department use the DA’s decline to prosecute as a pretext to conclude it’s own investigation.

8. Set the accused sexual predator free! With a badge and a gun, of course. But for some reason he now has to wear a lapel camera on his shirt at all times.

Of course Pat McKinley’s long reign of error has now caught up with him, and the taxpayers of Fullerton, too. And the DA? Well, nothing there we didn’t already know.