Wow! Remember this story we posted way back on June 14th? It’s about a guy who claimed to have gotten physically assaulted by the FPD, who he says robbed him, and threw him in jail. Back in June this guy’s story was assaulted also, likely by the same goons who beat him up. Officer Cary Tong was identified as the culprit in the case, and, perhaps we should start including his name on the FPD Hall of Shame roster.

In light of all the horror stories that have emerged from the FPD dungeons since we posted this story, it seems more credible than ever. I wonder if all the trolls who tried the hair-splitting approach to discredit him are having second thoughts.

And I wonder if this guy has had the good sense to contact Garo Mardirossian.

When we posted a college student’s allegations of police brutality last week, several commenters responded by calling the victim a liar and saying that the claim could not possibly be true.

Well, here is the truth according to FPD’s own Internal Affairs department: the complaint containing allegations of brutality and theft was “sustained” against FPD Officer Cary Tong. 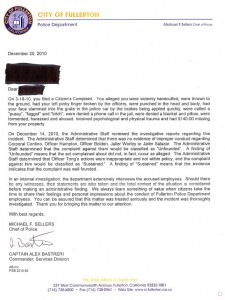 The letter from Chief Michael Sellers calls officer Tong’s actions “inappropriate and not within policy,” and states unequivocally that “a finding of sustained means that the evidence indicates that the complaint was well founded.“

Officer Cary Tong was listed as both the arresting and booking officer that night, putting him at the center of the entire event described by the victim in the complaint. That complaint included a long list of violent actions against the young man while he was handcuffed, including the deliberate breaking of his finger, theft of his personal cash and several beatings both at the arrest scene and during his booking at the jail.

The opaque and severely limited disclosures made in this non-public letter are a direct testament the police union’s lobbying power, which has fostered laws and an internal culture that encourages police departments to protect bad officers and keep their abuses secret from the public. In this case, we still don’t know if the officer was punished with a light slap on the wrist or even disciplined at all.

In all likelihood, Officer Tong is still patrolling the streets of Fullerton. Shoot, he might even pull you over tonight.