Here’s the story we reported at the end of June, a truly embarrassing tale of theft and utter stupidity perpetrated by one of Fullerton’s Finest. And a harbinger of things to come. Forget the final sentence. We now know very well about the moral turpitude that pervades pat McKinley’s police force.

The following report confirms that an off-duty Fullerton police officer was arrested for stealing an Apple iPad at a Miami International Airport TSA checkpoint last month. According to court documents, FPD Officer Kelly Mejia was caught on surveillance video taking an $800 iPad from another passenger just after it had passed through the x-ray machine in the presence of TSA security agents. 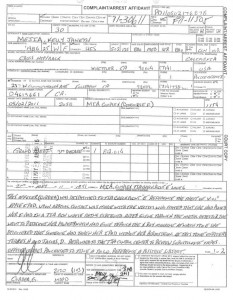 After the security footage was reviewed, Miami police canvassed the airport and discovered Mejia holding the iPad at the boarding gate. Mejia initially stated that she found the iPad and that she intended to keep it. Upon further questioning, the arresting officer says that Mejia confessed to taking the iPad and was placed under arrest for 3rd degree grand theft (a felony in Florida.)

The arrest report refers to Mejia’s occupation as a police officer and lists the address for FPD Headquarters as her place of employment. Kelly Mejia has been working with the Fullerton Police Department for at least six years and earns about $86,000 per year as a patrol officer.

It’s hard to imagine that this type of brazen theft in a high security zone would be anyone’s inaugural venture into pickpocketing. The authority granted to the occupation of police officer certainly presents many opportunities to bring home a little something extra on the side. I wonder if anything else is missing around here?

And how many pending criminal cases in Fullerton will be called into question if this officer loses her credibility in court? Will this officer be fired or just slapped on the wrist? Is this another indicator of ethical problems within Fullerton cop culture?