We are informed by the anti-recall campaign website that a character named Bill Gillespie has filed a complaint with the Fair Political Practices Commission against the campaign to recall the Three Deaf Dinosaurs: Jones, Bankhead and McKinley.

Allegedly this complaint is 25 pages in length the gist of which is no registration is on record for a political organization called The Fullerton Recall Committee. The only trouble is these idiots don’t know the actual name of the recall committee!

The name of the recall committee is: Committee Supporting the Recall of Bankhead Jones and McKinley, it has been registered, and of course has an FPPC number. I have been informed by recall organizers that nobody has made any attempt to make expenditures under any other name and that materials requiring it include the name and number.

Are these people really as stupid as they seem, or is this just a lame attempt to throw up some sort of smoke screen? Hard to tell since they really are pretty dumb. 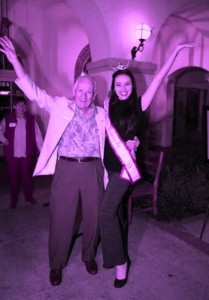 And as for Bill Gillespie, seen here partying with Miss Fullerton 1992, somebody needs to let him know that being a stooge for Dick Ackerman won’t be paying big dividends, and that there’s no fool like a an old fool.

Here’s Bill’s contact info, courtesy of the Fullerton Chamber of Commerce just in case you want to take him to task for his abject flunkydom:

51 Replies to “Another Jurassic Voice Heard From”