As is evidenced from the comments tonight, the comments from the last few city council meetings, the FPD protests, and the current city council agenda which is full of lawsuits which will cost the city millions of dollars, it’s obvious that there is a great deal of anger and mistrust towards the Fullerton Police Dept and the City of Fullerton.

A large number of negative incidents involving Fullerton police officers continue to come to light, ranging from alleged sexual misconduct of officers towards women whom they have stopped, to officers allegedly committing theft, to charges of false arrest, and so on. Our family experienced a mistaken raid on our home by armed undercover vice cops who were looking for the home next door.

Clearly, it is in the best interest of everyone for the FPD and the city council to work hard to win back the trust of people. In doing so it seems obvious that it would be Wise to Avoid Doing Things That Unnecessarily Increase Distrust.

There is a situation in the FPD that can be corrected. Making this correction should take away some of the distrust.

Your current FPD Spokesperson / Public Information Officer has had, and still has, a major role in the Fullerton Police Officers union. (FPOA) 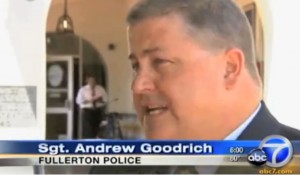 Here are three examples of his significance to the union:

I think it is absurd for someone in a significant role in the police union to be the spokesperson for the Fullerton Police Department.  This situation obviously causes distrust by many in the community and it makes the leadership of the FPD, the city manager, and the city council look foolish.

In his “union role”—Mr. Goodrich’s union task would be to put police officers in as positive of a light as possible.

In his spokesperson role”—when he is speaking on behalf of the FPD—putting police officers in as positive of a light as possible should not be his concern. His concern should be honesty, accuracy, and transparency.

The current FPD Spokesperson/Public Information Officer (Mr. Goodrich) should be reassigned to a different position and he should be replaced by an officer who has not had a major role in the Fullerton Police Officers Union.

158 Replies to “A Lack of Trust, by Robyn Nordell”