Have you ever been robbed?  Some robberies are violent and involve weapons or threats of force.  Others are of a white-collar nature.  Don’t be fooled, you are robbed either way.  One robber let’s you know he is taking your money while the other is much more insidious and calculating.  Our Redevelopment Agency is the latter.

Item 10 on this week’s council agenda deserves some attention. 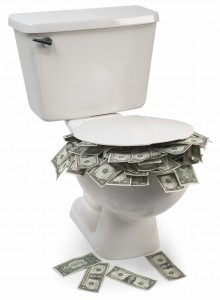 According to the staff recommendation signed by Ramona Castaneda, for our illustrious Land Czar Rob Zur Schmiede and Charles Kovac, these fine public employees would like to sell a bond.  They say that their autonomous agency could net between $26,900,000 and $32,000,000 in proceeds.  That sounds like a great idea if you like to squander public money.  The Staff report states that the debt service payments over a 17-year term would be approximately $2,900,000 per year starting September 20100 and ending September 2027.  Okay, so check my math: $2,900,000 x 17 years = $49,300,000.

That’s a cost of nearly $50 MILLION!  We are cutting staff hours, cutting services and rethinking the way we do business… at least everyone else is.  Our Land Czar wants the money so he can build MORE affordable housing.  That’s laughable since his agency has single-handedly destroyed and displaced more homes than any other in Fullerton.  Oh, but wait!  What’s that Doc?  Oh, he says it’s that law, we just gotta do it!  No we don’t.

Of course missing from the discussion about this venture seems to be the little matter of the lawsuit that Friends for Fullerton’s Future has filed against the Redevelopment Agency’s expansion plan. Is Zur Schmiede counting on tax increment from the proposed expansion area to pay off his bonds? Better hope not.

11 Replies to “Will Redevelopment Borrow $50 Million for Affordable Housing?”