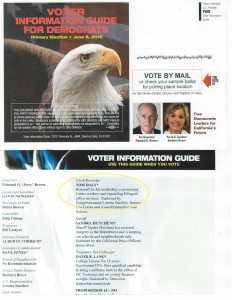 OK WHICH PARTY DO YOU BELONG TO TOM? PICK ONE ANY ONE JUST STOP LYING TO THE VOTERS.

Two-faced Tom Daly is busy lying to voters and is  trying to pass for  a Republican in slate mailers. By now I’m sure you have received a slate mailer describing Daly as the “Tax fighter who cut wasteful spending” or a “proven leader for reform”  or that he “defeated a local utility tax”.  Really?  As the Clerk-Recorder?  He even places his 15-year old portrait next to prominent Republican candidates or incumbents.  He surrounds him-self with Repuglicans like John Lewis and Bruce Matthias.  But no matter how hard Tommy boy tries to look Republican, we all should know that he is a pro-big government, free-spending, tax-wasting, lying, liberal Democrat and has been since his days in Anaheim.  Remember, this is the guy responsible for the election of Loretta Sanchez! 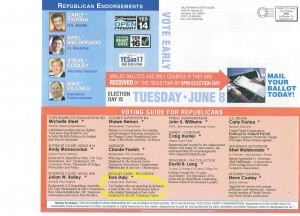 True, Tom has the right to buy any slate mailer he wants to but has he no loyalty to his fellow Democrats. There are plenty of slate mailers he can be on that are owned by Democrats but Team Tom Daly knows better.  He knows Orange County is a majority Republican county so Team Daly opts to play a Republican.   It appears that Daly is willing to do anything, including lying to voters to win this election.  If I were a Democrat I would be fuming! Tom doesn’t want you to know that he received money from unions or that he is endorsed by unions.  He doesn’t even list any union endorsements on his re-election webpage.  But if you scrutinize his campaign finance statements, you will see what a blue –blooded Democrat he really is.

Tom Daly is simply a two-faced opportunist willing to jump on any team to get the win.  We recently became aware of a slate mailer in which Tom’s portrait is next to Democrat candidates like Jerry Brown, and Gavin Newsom.  In the slate, he claims to be endorsed by none other than Loretta Sanchez and even Jose Solorio.  The back-stabbing truth is that he doesn’t mention these endorsements in his re-election webpage.

Whether you are a Republican or a Democrat, I believe you would vote for the candidate who represents your party’s values and for a candidate who is proud to be part of your party. Tom Daly fails both ways.  Let’s send him a message and vote the opportunist career politician out of office.

30 Replies to “URGENT (UPDATE): Message to Republican Voters… Clerk-Recorder Tom Daly is NOT a Republican.”