Okay. We know there’s a lot of money in lobbying. That’s why lobbyists contribute so much to political campaigns – to influence legislation and win government contracts for their clients.

But who knew there was so much taxpayer gravy to be slurped up in and around opaque local government districts? The other day we looked at Anaheim Mayor Curt Pringle’s massive windfall lobbying for the little-known OC Children and Families Commission, here. But Pringle has not only scored big bucks lobbying for the Heathy Kids Bureaucracy, he’s also made some serious green lobbying for the dead! 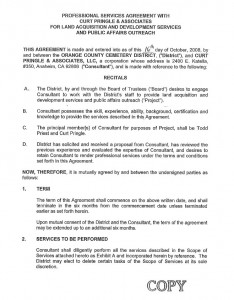 Yep. That’s right. In 2008 Pringle was awarded a $6000 per month annual contract to find new burial grounds for something called “The OC Cemetery District” and to do some sort of educational outreach to the community. He was also supposed to be some sort of “consultant” on developing the existing Lake Forest bone yard. You read right. $6000 per month is $72,000 per year. With a $25,000 bonus if he actually managed to accomplish something.

According to the General Manager of the Cemetery District, Tim Deutsch, the contract was extended to cover the balance of fiscal year 2009-2010, so presumably Pringle failed to deliver in year one, and was naturally rewarded with a contract extension.

So we have several problems as far as I can see:  one is a pretty vague contract with completely disparate elements, awarded without any sort of competition; and then there’s the amount – what seems to be an exorbitant sum of money with no guarantees of actually accomplishing anything; and finally, there seems  to be a lack of any sort of quality control or financial oversight in the management of this District.

It’s pretty obvious that the District has more money than it knows what to do with. But the real question is: why didn’t they simply engage a commercial realtor to find them more land – at zero cost? And while we’re contemplating embarrassing questions, what qualifies Pringle’s PR shop as a cemetery planner or a cemetery entitlements developer? Isn’t that what the District pays it’s general manager to do?

And finally, why on Earth does the Cemetery District need anybody to do community outreach?  Isn’t that why the phone book has the Yellow Pages?