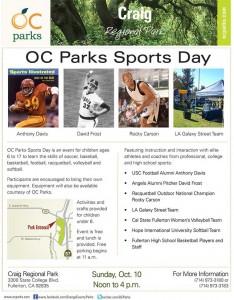 I received a call this morning from our 4th District County Supervisor Shawn Nelson asking if I would be willing to help coach a youth football clinic at Craig Park. Supervisor Nelson, aware of the fact that I played high school and Division I college football and that I had coached high school and Pop Warner football, needed someone to fill an unexpected vacancy on his coaching staff.  My Sunday alternatives were to either spend the day helping 6 to 17 year olds learn a bit more about football or make more No McKinley signs. No brainer. I dusted off the old whistle and off to the park I went.

The event, billed “OC Parks and Sports Day,” was packed with eager kids with more energy than the energizer bunny. My day was not only fun and rewarding but a lot more interesting than I expected. During a break in the action I met the legendary Anthony Davis, but also the not so legendary OCEA union boss, Nick Berardino. Both were entertaining characters: AD reminisced of the days when he played smash mouth football at USC, and Berardino reminded me about the days he spent a million dollars bad mouthing Nelson in the last election,  how that million bucks only moved #2 (Harry Sidhu) up 6 percentage points, and how he still got his as kicked by 12%.

Bernardino went on to explain to me that they (the employee union) were afraid of Nelson, but have learn that Nelson is not the monster they though he would be. Nick further explained that the problem in the county is corruption in upper management and the county employees (the worker bees) are the only ones that actually pay into their retirement and the people that are on Easy Street are the upper level managers including county CEO Tom Mauk who’s package equals around $350,000 per year (while collecting over $100,00 from his retirement pension from the city of La Habra). Nick and I both agreed that it’s always the little guy that gets dumped on and the corruption in the county needs to stop. Amen to that!

Supervisor Nelson tells me that he will start checking into the pay and benefits of mid to upper management, and also find out if they actually do anything except shuffle paper back and forth to each other.

22 Replies to “Sunday In The Park With AD, Nelson and Berardino”