Why is John Lewis, whose own partner, VP Matt Holder, is an alternate on the OC GOP central committee supporting, endorsing, and working for a Democrat? It isn’t as if this was some up and coming blue-dog Dem that has a chance of converting to the red side either. This is the notorious Tom Daly whom FFFF has been reporting on for several months as perhaps the most egregious and dubious waster of public funds that OC tax-payers have seen in a long time, maybe ever! 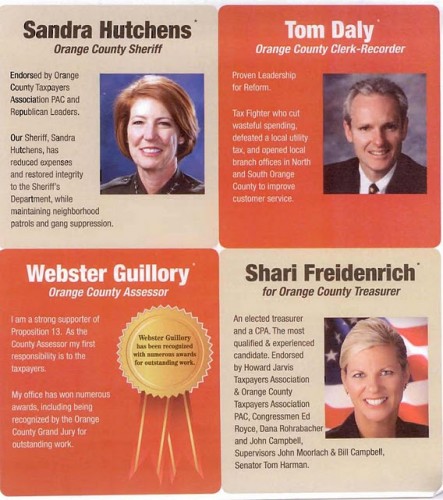 Clearly John Lewis isn’t doing it because he believes his own rhetoric…or does he? This mailer/advertisement says Daly is a “tax fighter has cut wasteful spending…” I suppose John Lewis has missed the news: Tom Daly has cost OC taxpayers millions upon millions of dollars of needless spending for the sole purpose of satisfying donors, their friends, and their families.

No, I think Lewis got that memo. In fact, I think Lewis is a big part of that waste, though I don’t have any tangible proof. I have only heard the rumors about Lewis hanging around the OC Hall of Administration looking to get into the budget meetings of Daly, et al. But the new security system makes it tough to sneak in and grease the wheels of department heads. Less the contrary be shown, these are still just rumors.

Regardless, why is this former California GOP State Senator working for Daly? According to his website, Lewis has worked on sports facilities. Does that include sports museums and sports hall of fame like what Daly has been working on? One can only guess.

The only reason I bring any of this up is because the OC Register did a short piece on this. In the article, Lewis says he doesn’t know why OC Assessor Webster Guillory’s photo was not included in the ad. That seems like a big OOOPS for a firm who touts being consultants to guys like Congressman Ed Royce and Assemblyman Chris Norby. The “mistake?” seems like something a high school intern might make, not a big time GOP (sometimes Democratic) consultant might make. So what gives?

And I haven’t even mentioned Sandra Hutchens, who, according to the Press Telegram, hired Gilliard-Blanning as her political consultant. I tell you, some of these “Republicans” sure get around. Maybe Guillory should call Gilliard so he can get his face out there to voters.  Until then, here is Webster Guillory.