Previously we noted the Fullerton Observer’s legal maneuvering in an attempt to add itself to the city payroll. Last week we found out that Sharon Kennedy’s court filing had been met with objections by both the Orange County Register and the City of Fullerton.

The City’s objection is based on the same points we brought up a few weeks ago – namely, the Observer is not printed within the city, it is not printed weekly and it doesn’t have a bona fide list of paying subscribers as required by law. That’s three strikes for the Observer. 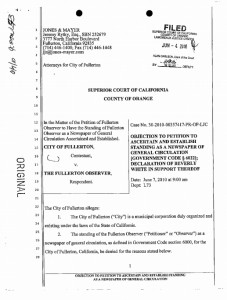 The city calls into question Sharon Kennedy’s own filing, where we learn that the Observer boasts a whopping 598 paid subscribers and a monthly online distribution that rivals FFFF’s daily hits.

Next we have an objection filed by OC Register attorneys, which finds fault with the notice that Kennedy filed for her own hearing. The Register sums up the problem by saying “It is ironic that the Petitioner [Fullerton Observer] is seeking to publish important legal notices, yet cannot even publish its own Notice correctly.” 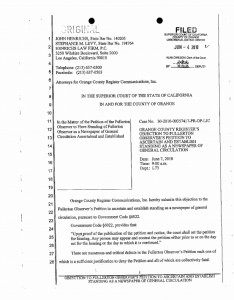 Kennedy pushed out her hearing to the end of July. I suspect she will drop it all together rather than suffer further embarrassment.

Bottom line: Kennedy’s dying cause here is to get the Fullerton Observer onto the city payroll. We’ve already demonstrated the paper’s inability to criticize city staff, engage in any kind of investigative journalism within city hall or participate objective reporting all while claiming that it is a legitimate newspaper. It’s hard to imagine any of these conditions improving should Kennedy’s paper wind up on the taxpayer’s dole.

9 Replies to “Observer Smacked Down”