One of the things we here at FFFF stand for is the idea of government accountability.

So naturally we were pretty sore when we saw the memo from County CEO Tom Mauk to the Board of Supervisors  downplaying the disastrous purchase of the money pit at 433 W. Civic Center Dr. here.

Mauk finally produced the smoking gun—three years too late—an RDMD analysis estimating the needed cost to make the building functional. The amounts reached into the millions but for some reason this critical information, which was known to staff in June 2007, was withheld from the Board. Any guesses as to why? 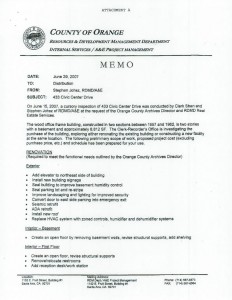 Evidently Mr. Mauk is not interested in accountability. But we are, so please take note of the names of the people in the County Clerks office and the RDMD who were copied on this June 2007 memo. They are:

See any familiar names ? Jean Pasco in particular stands out since she was the clerk  employee who acted as liaison with the Board in the matter of the building at 433 W. Civic.

This is not the story of an inadvertent error; no this was a deliberate attempt to mislead the Board of Supervisors and the evidence lies in the statements contained in the staff reports that deliberately mischaracterized the condition of the building and that were in fact untrue.

Hopefully the Board of Supervisors will be more interested in finding out what really happened and why crucial information that staff had been aware of for many months was intentionally withheld from them.