A source inside the County government has directed our attention to a contractual relationship between the County Clerk’s department and a “consultant” that bears closer scrutiny. Our source has indicated that monies were paid out for questionable or dubious “services.” 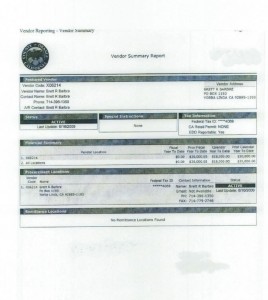 This contract involves Barbre & Associates; Brett Barbre is a former County employee, a Water District official, and now a self-styled political public relations guy. It appears that Mr. Barbre received at least $36,000 through last summer to do something (see vendor report, above). What did he do? Our source tells us it was supposed to have something to do with organizing an Orange County Hall of Fame memorabilia display. We’re not buying into that just yet since such an inconceivably profligate waste of money, especially in a recession, is hard to ascribe to anybody – even a big spender like Daly.

Nevertheless,  Barbre’s name immediately piqued our curiosity since he claims to be in PR, a function that Daly supposedly hired former reporter Jean Pasco to perform. Furthermore, Barbre, a nominal Republican, was an early and public supporter of Democrat Clerk/Recorder Tom Daly in his quest to be our County Supervisor. Check out the “host committee” to Daly’s 2009 fundraiser. Yes, Brett, we see you right there, #6 in the first column. Later in 2009 Barbre also took on the job of introducing Daly’s hand-picked successor and Clerk Department employee, Renee Ramirez, to the OC GOP Central Committee. Coincidences?

Since Daly and Ramirez run the Clerk/Recorder’s office, we immediately started to wonder just what Barbre did, to pick up that 36K. We have such suspicious minds, you see.

And so we have made a public records request with the County to find out the scope of services that were supposed to be rendered by Barbre and just what was accomplished for all that money.

And when we do find out we will certainly share the information with you.