We were looking through Clerk-Recorder Tom Daly’s campaign expenditures and stumbled upon a very interesting expenditure or shall we say “more monkey business”.  In his statements, Tom listed a $275.37 payment to current Clerk-Recorder employee Rosa Chavez for “refreshments for 80 staff” since he knows they hate both him and his minion Assistant Clerk-Recorder Rene Ramirez. 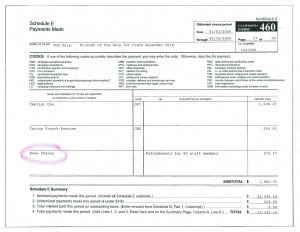 This payment is very suspicious and it appears that Daly is working his staff for votes.  Why would he pay an employee out of his campaign funds for something that was done at his work place? As we all know, campaign activity is to be kept out of your county work place especially if you are the elected official. Someone call Shirley!

The more interesting thing is that since this payment was made to Rosa Chavez, she has been promoted to a supervisory position. Is Tom Daly rewarding Rosa Chavez so she can rally the troops to vote for him?  This is a total conflict and disregard for all the rules.

Or perhaps this is a desperate attempt by “Manager of the Year” Tom Daly to win over his staff who is praying that he gets voted out due to his lack of leadership and commitment to the department.  After seven years of neglecting his staff and hiring his friends, Tom Daly is now realizing that he has dropped the ball.  Like your typical career politician on election year, he is now trying hard to win over a staff that has little respect for him and his assistant Renee Ramirez.  Has he acted late? I guess he will know the answer this June 8th.

19 Replies to “IS TOM DALY BUYING HIS STAFF’S VOTES?”