When you put your name on the ballot, you’re asking voters to trust you with hundred million dollar budgets and the power of a government office. Therefore, it is a duty of the public to make sure that each candidate is qualified to handle this burden of responsibility. Anybody with a financial history that cannot stand up to basic scrutiny should not put themselves out in front of the voters.

On that note, Aaron Gregg should not be running for Fullerton City Council.

You see, attorney Aaron Charles Gregg filed for a $107,000 bankruptcy about 10 years ago, discharging over $75,000 in federal and state back taxes and $30,000 in other debts to individuals and businesses, all while claiming $8,000 a month in income from his business. 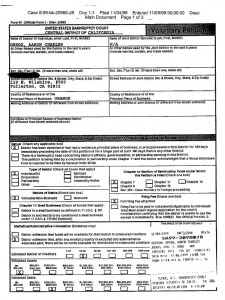 It’s all laid bare in these papers that were filed in federal bankruptcy court, which show that Aaron Gregg neglected to pay his taxes for most of the years from 1992 through 1998. When the debt piled up, he hired an attorney and let it all go.

Among the more curious items in the filings, Aaron Gregg listed assets of $25 dollars cash, $200 in clothes, $75 wrist watch and some office supplies. Times must have been tough for this professional attorney of 21 years. Fortunes were about to change, however, when he realized that he would be able to dump his debt but keep his leased $5,000 Savin copier. I bet that will come in handy some day.

The documents also show that halfway through the bankruptcy process, Aaron Gregg discovered that he might also owe money to a family in San Pablo City, Philippines. What could that be for? Well they’re never going to vote in Fullerton. Might as well get rid of that debt too.

In the end, it looks like Aaron was able to dump over $100,000 owed to nine different creditors, two of which were government agencies. When the tax man doesn’t get his revenue, guess who gets to make up for it? That’s right, you and me. And somehow I have a feeling that Aaron Charles Gregg made it out of this financial mess and has been doing just fine ever since. But that’s no reason for him to think he’s a valid candidate to run our city.

On second thought, Aaron’s keen ability to get himself out of unwieldy financial commitments may come in handy when it’s time for Fullerton to escape our massive redevelopment and pension debts. But it’s probably safer to just call him in as a consultant.