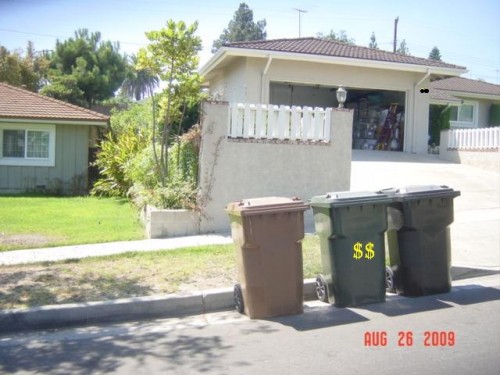 Fullerton trash in green bins is gold to hundreds if not thousands of recyclers throughout North OC. People who are in the marginal business of recycling are now flocking to neighborhoods throughout Fullerton Monday- Friday. Depending on the day of the week that your trash is picked up you may notice people competing to score the goods from the green bin. It’s no coincidence that it’s green is it?

So who does the recyclable stuff belong to? Good question. Someone “inadvertently”  forgot to label the bin Property of MG Disposal or Property of the City of Fullerton, and the recyclers believe that they are doing business as usual.

Most people understood that if everyone helped (recycled) by sorting our trash, then the hauling rates would be lowered (or at least not raised) and would save us  a little money on our trash bill. But now that we are all sorting the “goods” for the recyclers on trash day it has become an added bonus for those in the shopping cart recycling business.

Is a crime being committed? Is anybody cited for it? Who makes up the loss for MG Disposal?

Did the city and MG Disposal leave out an important clause in the contract? Or is it just easier for everybody to look the other way?

19 Replies to “One Man’s Trash is Which Man’s Treasure?”