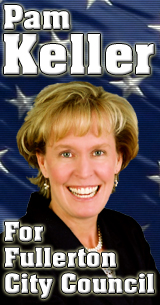 You will never see me taking money from developers...

We’ve been sharing information (when we find it) with our Friends about the unusual – well, unique, really – relationship between the Fullerton Collaborative and the Fullerton School District. Fullerton City Council woman Pam Keller is the Executive Director of the former, but remains an employee of the latter. We’ve coined a term for the process – “contracting-in.” It’s such a rare strategy that we’ve never actually seen it in use before.

Today we share the 2009-2010 agreement between the Collaborative and the FSD – agreed upon by the Board of Trustees unanimously and without discussion as a “consent calendar” item. 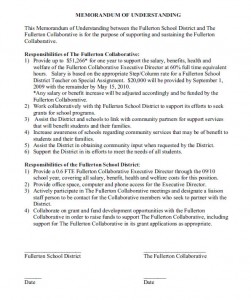 Notice the asterisk in item #1 of the Collaborative’s responsibilities. It leaves open the possibility that the District may give the Executive Director a raise – and stick the Collaborative with the bill! Now we ask you – what kind of an organization would agree to an open-ended codicil like that in a contract? We’ll help out: one in which the Executive Director (who is also a board member), is the direct beneficiary, that’s who!

We also note in the 2009-10 FSD budget documents a throw away line stating that the Collaborative kicked in extra money to the FSD. It’s noted in that little box at the bottom of the document (below). Now why would the Collaborative do that? What kind of “charity” gives additional money back to a contractor? Possibly a charity whose fund-raiser’s efforts are so successful that a surplus exists which could be kicked back to the District to pay for that raise described in item #1 of the agreement. Of course we’re just speculating here. 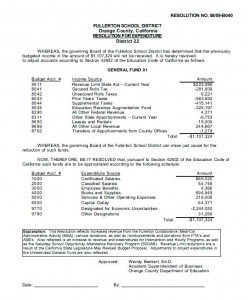 But, none of these speculations would be so thought provoking if the Collaborative’s mission weren’t so fuzzy, and if it had major expenses other than the cost of hiring a government employee to be its Executive Director/fund-raiser. But the mission is so loose as to be practically meaningless, and the cost of the Executive Director consumed most of its budget in 2007.

All of this really ties back to the fundraising issue and who actually gives money to the Collborative. But it’s perfectly clear now that the funds – donations, fees, whatever –  that go into the Collaborative, go to pay Keller – via the FSD; the question of additional “revenue” given to the FSD by the Collaborative opens up a new issue for people who contribute to this endeavor and who might start wondering why the Collaborative can’t be run by its own employee, or better yet, by volunteer labor.

12 thoughts on “What Color Is Pam Keller’s Parachute?”