Skip to content
Posted onSeptember 4, 2009May 23, 2011Fullerton 2010
by The Fullerton Harpoon10 Comments on MWD RAISES RATES; NOW WANTS TO JACK UP PENSIONS

UPDATE: The MWD Board will take up this matter at its meeting on Sept 15.

The Metropolitan Water District, one of the shadowiest and least transparent agencies in California is contemplating raising its employees pension benefits. The Register opines about it here and makes reference to an original story by Teri Sforza here .

With bad news about how its own pension plan has been rocked by huge CalPERS investment losses, and with financially teetering state and municipal governments it seems like a poor time for the MWD to be grabbing for more tax-payer backed gravy to benefit a giant gaggle of water bureaucrats. Plus, the MWD just passed along a water commodity rate to its members that we are all paying for.

Fullerton is original member of the MWD and has been represented for a long time, some say way too long, by a fellow named Jim Blake – as we wrote about here .

UPDATE: The MWD is scheduled to take up this matter at its meeting on September 15.

Jim has been on the MWD Board for so long that almost nobody can remember when he went on back in the 80s (1980s, that is). The people who originally appointed him are all long gone. But Jim has well-managed his continual reappointment without anybody else getting a shot at the job. Well, now he’s got an issue that may just spell trouble for his lengthy tenure.

Blake has always been a big pro-staff drum-beater, and its hard to imagine that if, left to his own devises, he wouldn’t go for the pension jack. If he goes for it now, the people who appointed him may discover that it is they who are ultimately responsible for the actions of their appointees. Under ordinary circumstances this might not bother Fullerton’s own pension spiking gang too much. But 2010 is an election year, and we feel certain that this the pension increase will become an issue if it goes through. The city council needs to know that this continued fiscal recklessness will not be tolerated.

Fullerton taxpayers are looking down the barrel of a major increase in pension payments next year. The CalPERS agency has lost as much as 37% of its assets in the stock market crash and taxpayers are contractually obligated to make up the difference.

Our Friends at the California Foundation for Fiscal Responsibility just released a report called the CalPERS $100,000 Pension Club. In their handy database, we located the annual pensions of 26 City of Fullerton employees who are bringing home over $100,000 a year post-retirement at our expense. We believe in an open government where the residents of Fullerton know what they are paying for — so here is the list:

Though we did our best to identify the contributions these individuals made to our city, some of the names do not ring a bell. Perhaps our loyal audience can fill in the blanks for us.

We are not against paying market rate for talented and motivated professionals to run our dear city — our disdain lies with the cloud of financial uncertainty that pension plans represent to our taxpayers. Historically, pensions are gleefully spiked in rosy times, with little thought given to potential long-term risks.

Out in the real world, we often use a calculation called “Total Compensation” — the sum of all salary, health benefits, taxes and retirement contributions for a given employee. This number allows both the employee and the employer to calculate the exact compensation of the employee and to ensure that it is comparable to that of similar jobs at other businesses. Businesses can see exactly what they are paying for an employee and thus how that will affect their budget for years to come.

With pensions, no such calculation is possible because an employer is making a future commitment based on unlikely investment forecasts stretching 50 years into the future. As we are about to painfully learn, those forcasts can be incredibly wrong. If we don’t change the way we compensate city employees now, we will continue to foot the bill for a very long time. 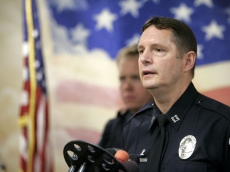 Fullerton Police Capt. Geoff Spalding, 52, a 32 year veteran with the Fullerton Police Department, was hired to become the Police Chief of Beaverton, Oregon, on Monday. The Oregon town has a population of 85,000 and 132 sworn officers. Fullerton has 160 sworn officers for a population of 140,000. In a prepared statement, Beaverton Mayor-elect Denny Doyle indicated it was a difficult decision to select a chief, but (Spalding’s) experience and his history of involvement in his local community will serve Beaverton very well.

Raised in Fullerton, Spalding attended Woodcrest Elementary, Wilshire Junior High, Sunny Hills High, Fullerton Collage and Cal State Fullerton where he earned a degree in criminal justice. He also holds a master’s degree in emergency management from Cal State Long Beach. He and his wife have two sons, ages 18 and 20. He was involved with the Cub Scouts at the Fullerton Kiwanis Club for 8 years and is a volunteer for several other local civic organizations. He was a proponent of a new “gang intervention” program with Fullerton “at risk” youth. Spalding will be trading a salary of $153,000 plus benefits for Beaverton’s salary of $118,836 plus benefits. Because of CalPERS, Spalding will also receive 90% of his final “retirement” salary. The Fullerton City Council recently hired a search firm to the tune of $40,000 to conduct a search to replace retiring Chief Pat McKinley next month.Spalding spent Christmas day, what perhaps could be his last day on the force patrolling Fullerton streets so the younger officers could spend some holiday time with their families. “I would have loved to have become the Chief of my hometown” Spalding said.Oddly, the Fullerton City Council would save tax payers over $1.5 million over the next ten years if it were to happen.