Skip to content
Posted onFebruary 7, 2012February 7, 2012Arts & Architecture
by The Fullerton Savage18 Comments on Amerige Court—How to Give Away Public Land for $500

Last December The Fullerton Redevelopment Agency approved yet another extension to Pelican, the hapless developer of the gigantic Amerige Court project downtown. Readers will recall that this project was approved in 2008 over the objections of hundreds of people who saw it for what it was, yet another cheap looking, insipid  copy of the retail/loft model that is supposed to revive downtowns.

This time the now unemployed redevelopment staff allowed the developer to plan to rent the housing units at first, even though when it was first approved years ago it was supposed to be all about classing up the area by inviting the landowning gentry to move in and stare down the lawless drunks of Fullerton’s bar culture.

So two months ago, despite several people speaking out against the fourth (!) amendment to the original agreement, and no one speaking in favor of it, the extension was granted. Bruce Whitaker and Sharon Quirk-Silva dissented, having had enough of developer excuses for why they haven’t been able to build anything, but Bankhead, McKinley, and Jones predictably went along with this giveaway of taxpayer owned land in the heart of the city.

Well, that was back before Redevelopment disappeared last week, so now they have to do it all over as the City Council tonight.

Show up to watch developer owned politicians try to give away your land once again, if you let them.

Last week we showed you why the Three Dinosaurs were so willing to perpetuate this disaster of a project.

When you take their money, you have to do their bidding. Besides, if you can give away public land to build a monstrous and unneeded architecturally appalling project that will add more traffic to the area and tear down some really old buildings to do it, why wouldn’t you? Especially when the half of the development partnership that’s still in business gives you $500 to keep you from being recalled?

END_OF_DOCUMENT_TOKEN_TO_BE_REPLACED
Posted onFebruary 2, 2012February 7, 2012"Dick" Ackerman
by The Fullerton Shadow27 Comments on So Who Do Downtown Developers Support?

Update: Gentle Friends, I forgot to remind you that Pelican Ontario was also shaken down, er, contributed $300 to Pam Keller for her Fullerton Collaborative just ’cause they care so darn much for Fullerton.

What is Pelican Ontario? Why that’s the partnership proposing “Amerige Court,” that god-awful downtown Fullerton monstrosity in which millions of dollars worth of land is to be given to the developer for free. What’s that you say? Free? Of course. Because to people like McKinley, Jones, and Bankhead giving public resources to private interests without due consideration isn’t a gift of public funds, it’s being pro-business. We get stuck with the traffic and they get the campaign contributions.

You have to admit it takes a lot of nerve to attack Tony Bushala as a downtown developer when he isn’t, and at the same time take the money from people who have millions of reasons to prop up the Three Dyspeptic Dinosaurs. But these worthies are not bothered by ethical nuisances like hypocrisy.

Friends of Fullerton’s future have read many pages on this site dedicated to cataloguing the manifest failures of Redevelopment and all the attendant boondoggles it brings with it. Blind support for these disasters is one of the reasons The Three Blind Brontosauruses are being recalled. One of the biggest disasters-in-the-making is the lamentable “Amerige Court” project, another gigantic monster to be plopped down into Fullerton, and a totally staff-created and driven mess.

Naturally Bankhead and Jones have supported this gross example of corporate welfare that we end up paying for. McKinley is bound to go along for the ride.   When he does we’ll be sure to let you know about it. Here is an update.

By Judith Kaluzny as published in The Fullerton Observer

The Amerige Court proposal is not dead yet.   The council will vote December 5, 2011, whether to extend a Disposition and Development Agreement (DDA) first approved February 7, 2006,  the third amended version having been approved by council March 4, 2008.

Meantime, the Laing portion of the Pelican-Laing developers, had been purchased in June 2006 by a company in the mideast country of Dubai, and Laing subsequently filed for bankruptcy in February 2009.

“Amerige Court,” described as “mixed-use development with up to 124 residential units and as much as 30,000 square feet of commercial area” was to be located on the north and south parking lots in the 100 block of West Amerige.  At one time, the project was to be nine stories high on the south side of Amerige, with a five story parking structure on the north side of the street.

A Draft Environmental Impact Report was prepared in 2008 and concluded that there were “no potentially significant impacts that cannot be mitigated.”

Richard Hamm of Pelican Properties said recently, “It has been impossible to make any progress with the project since the State has attempted to end redevelopment.  Of course, the economy has not helped.

“We have four companies waiting in the wings to join us in Amerige Court. We want to get the extension to the DDA as well as a few details worked out with Redevelopment before going forward with a new partner. Amerige Court is still a great opportunity. Downtown Fullerton is still a great place (despite the recent events).

Points in the original contract included:

-Giving $5.5 million from a $6 million bond issue to Pelican Properties to build the parking garage.  The bonds were to  be paid back by the residents and businesses in the new development.  That will cause the businesses to cost $1.93 per square foot more than any other retail space downtown according to the city’s consultant, Keyser Marsten Associates, which advised the city to do “more due diligence” before they entered into this contract.

-The land Pelican will be given the by the  city was not appraised, but agreed as being worth $8 to $8.5 million.

-Tearing down the historic properties on the southeast corner of Malden and Amerige Avenues.

[The DDA and amendments are a maze of turgid language:  The Third Amendment provides for a “future amendment,” but if  “a Future Amendment is not approved by Developer and the Agency Board (city council) by April 5, 2009, or such later date as may be approved by the parties in the sole and absolute discretion of each of them, either party shall have the right to terminate the DDA… .”

[The third amended DDA also includes the following language: “However, the Entitlements have not been approved as Agency has not approved the Project or any other project for the Property.  The parties acknowledge that this Third Amendment does not constitute the third amendment that was contemplated under the Second Amendment.”]

Begun in 2001 with a “rendering” commissioned by Paul Dudley, then Director of Development, and shown to city council members in closed session, it has been said that this was a scheme to get more parking for the bars/restaurants downtown.  (In December 2002, restaurants downtown were exempted from having to provide parking or to obtain conditional use permits.)

FFFF has argued for years that this grossly subsidized monstrosity should be killed outright. As I noted, above, the extension of this agreement will become another issue in the upcoming recall campaign: a perfect example of corporate welfare of the type that has characterized massive subsidized apartment blocks in downtown Fullerton already approved by Bankhead and Jones over the years.

END_OF_DOCUMENT_TOKEN_TO_BE_REPLACED
Posted onOctober 9, 2009February 7, 2012Behind Closed Doors
by The Fullerton Shadow9 Comments on The Status of the “Amerige Court” Monstrosity; On Life Support – Pull The Plug! 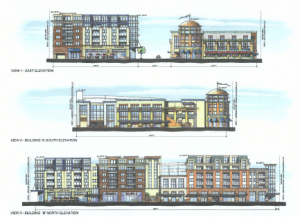 Don’t hold your breath waiting for the good folks at City Hall to provide a public update on the drawn-out Amerige Court saga. They would just as soon you don’t know while they work out a deal behind the scenes.

Well, if they won’t we will. To that end we sent out our crack team of investigative reporters and found out a few things.

As many of the friends doubtless know, the original partnership – Pelican/Laing – that was getting all of the Redevelopment gravy: free land, super-high density, etc. etc., is no more. John Laing Homes went into receivership. But we have been informed by our sources that before they declared under Chapter 11 they managed to offload their interest in the Amerige Court project to their erstwhile partners, Pelican. We suspect that they sold out for pennies on the dollar to salvage something before a bankruptcy court judge could lock things up.

The possibility of a kickback to former Laing employees is hard to ignore, and we hope that this thought will occur to the bankruptcy judge, too. The City granted entitlements were and are, worth millions to somebody who can actually seal the deal.

The Redevelopment Agency staff is aware of all this, and rather than start over will no doubt push hard for the Agency to accept this new arrangement, if they haven’t already. It’s hard to see the Pelican boys getting financing to build a birdhouse these days, but many options are open including selling off the whole mess to somebody else. They may also try to repackage the deal in a “softer” format to makes sure they can get the green light.

So the time is ripe to call City Council members who voted for this huge subsidized eyesore. Keller, Quirk-Silva, and Shawn Nelson have an opportunity to correct their previous mistake and do the right thing by the people of Fullerton. Bankhead and Jones are, of course, far beyond hope, but you can try them, too, if you care to.

END_OF_DOCUMENT_TOKEN_TO_BE_REPLACED
Posted onAugust 23, 2009February 7, 2012Dick Jones
by The Fullerton Shadow14 Comments on A One-Year Look Back: Pam’s Approval of the Amerige Court Atrocity

It must have been pretty hard for Pam to try to convince her supporters how much she “respected” them – right before she went ahead and stuck it to ’em. Keller’s campaign promise of 2006 was to have planning be “driven” by public input, blah, blah, blah etc., but you get the feeling watching this clip that she had already long since made up her mind to go with the dee-veloper, and was just throwing some verbal crusts for her loyal subjects to gnaw on.

Pam’s comments were well-received by the Chamber lackeys and downtown Redevelopment toadies in the audience, but those who opposed the monster project and had voted for Keller’s promises to represent them rather than development interests, must surely felt just a wee bit, um, betrayed.

The “I’m so torn” plaint, the goofy half-grins, the eye lash battings, (all part of the “I’m just a silly girl” routine), are a pretty annoying shtick. But Pam had better be careful with the coquette act because some lonely swains like Dick Jones seem to get off on it. Check out the hand kiss at the end of the clip and Pam’s apparent revulsion – and then her flippant threat to take back her vote. Enjoy:

The Laing of the LLC is John Laing Holmes. Laing is a home builder with a reported debt of $500 million to $1 billion and is in Chapter 11 receivership. And furthermore, the word on the street is the front men of the LLC Hamm & Pellican are also on the verge of financial protection.

Exactly what kind of negotiations could our financially unexperienced City Council be doing with a group of financial wizards who are running amok in debt? When is the Redevelopment Agency going to realize the housing market has collapsed? If this project goes forward it will be a financial wreck for Fullerton.

Dear Friends, how many of you realize Pam Keller, Sharon Quirk, Don Bankhead and Dick Jones have already voted to place the Fullerton tax payers on the hook by guaranteeing the developer who’s in bankruptcy a 15% profit?  Who besides us are willing to admit this project was a turkey from day 1?