We’re all used to politicians who can lie on demand. Then there’s our own councilcreature/lobbyist Jennifer Fitzgerald who has turned lying into a virtual cottage industry. Here’s a repost from 2017 telling a story that I promise is going to haunt our ethically devoid Mayor come election time, this fall.

She probably hopes that Fullerton citizen have either forgotten or are unaware of this issue. If either is the case, some of us will work to rectify that.

In March of this year our lobbyist-council person Jennifer Fitzgerald began to receive the typical council pay check, plus 100 bucks a month to not enroll in the City’s health insurance plan.

“So what?” you may be saying to yourself. Well, here’s the problem. In her self-promotion for political office in 2012 Fitzgerald got way up on her high horse about refusing compensation for “public service.” She even made a promise! 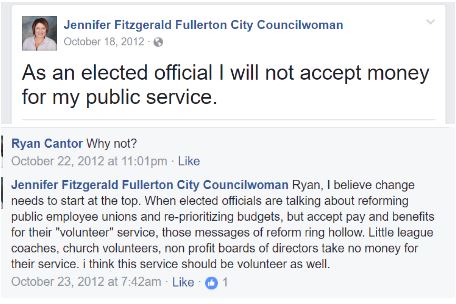 And that’s not all. Enjoy this lecture on the high moral ground Fitzgerald stakes out for herself in 2013. She made a big deal about her refusing compensation when she first joined the council. Could the moralizing get any thicker?

Between 2013 and now a lot has changed for Ms. Fitzgerald, most notably a vice presidency at Curt Pringle and Associates, the notorious lobby shop where no public asset is too valuable for cheap disposal. It may very well be that Fitzgerald now has a completely different attitude toward “public service” than she did five years ago.