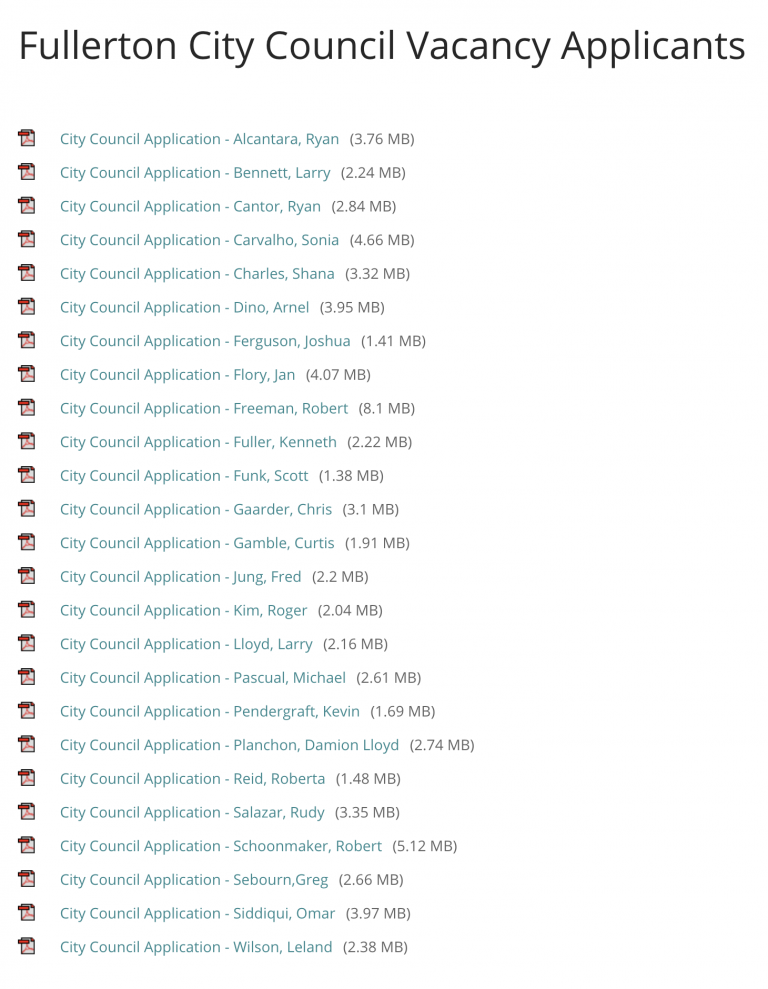 The deadline for council applications has passed and 24 people want the open council seat that Jesus Silva caused to be vacated.

Technically there are 25 names but I threw my name in not to try for it but to show the ridiculousness that is this process. However 24 peeps actually think they have a shot in this Battle Royale which is just funny.

I’m not that naive, desperate or inane to want this position let alone think I have a shot. Don’t believe me? I listed my kids and my cat as references.

FitzSilva showed their cards last month and we can spot the various partisan stalking horses in the field pretty easily.

Otherwise this list is both a Who’s Who of wannabes and simultaneously a Who’s Who of Who? I’m pretty active in Fullerton politics and some of these people I couldn’t pick out of a police lineup.

I don’t hate a few names but won’t back anybody for obvious reasons.

Gotta love the pretentiousness of some of these applications. 29 pages? Really Mr. Freeman? Come on, nobody cares enough to read that much about a potential appointee. One dude actually included his transcripts but I want to know why he didn’t go all the way back to Kindergarten? We need all of the info apparently so what is he hiding?

Some people are just overeager for power and prestige and don’t know any better. Others of us know that this game was rigged before the board was set out and just find it funny.

Ok maybe that last one is just me.

I’m officially not backing anybody but myself in this nonsense because I don’t want anybody to be appointed. Like I said at council, I don’t care if there are 4 or 5 voices on the dais because despite all of these years with 5 lukewarm bodies up there they have yet to produce so much as a balanced budget.