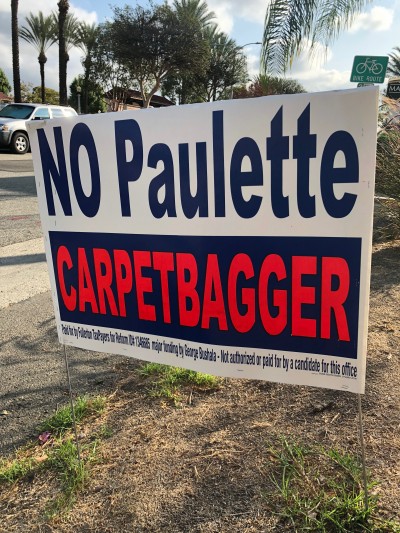 Over the weekend the rumors have been swirling as to the fate of Paulette Marshall Chaffee City Council campaign after having apparently been caught on camera removing No Paulette – Carpetbagger signs. We will probably have a clearer picture of the truth of that rumor at tomorrow’s City Council candidate form, but even if she does drop out of the race, this does not end the story.

Her husband, Doug Chaffee, is currently the Mayor of Fullerton and a candidate for Board of Supervisors. While he was not involved in either recorded sign theft, his title as Mayor creates a conflict for the City to investigate the crime. Also, as an active candidate for the Board of Supervisors race, he has an obligation to speak out on this matter and do what he can to make things right. especially since he was the direct beneficiary of an almost identical anti-carpetbagger campaign against his Democratic opponent in June (one Joe Kerr, aka Cotto Joe).

Tony Bushala (one of the founders of this very blog, although he divested his interest two years ago), though Residents for Reform and his brother George Bushala, paid for the political signs that were stolen and he wants them back. He has penned a written request to Mayor Chaffee requesting return of the signs in his residence and has authorized publication here. As an initial good faith gesture, Mayor Chaffee should be strongly encouraged to return the signs on his property forthwith. 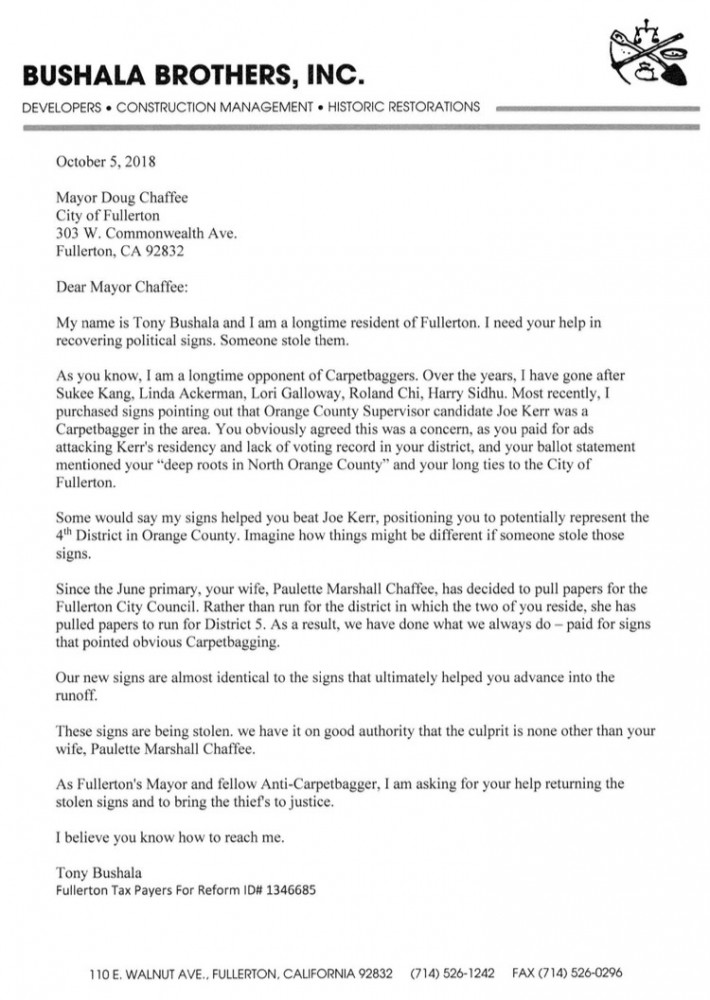 The text of the letter is provided below,

My name is Tony Bushala and I am a longtime resident of Fullerton. I need your help in recovering political signs. Someone stole them.

As you know, I am a longtime opponent of carpetbaggers. Over the years, I have gone after Sukee Kang, Linda Ackerman, Lori Galloway Roland Chi, Harry Sidhu. Most recently, I purchased signs pointing out that Orange County Supervisor candidate Joe Kerr was a Carpetbagger in the area. You obviously agreed this was a concern, as you paid for ads attacking Kerr’s residency and lack of voting record in your district, and your ballot statement mentioned your “deep roots in North Orange County” and your long ties to the City of Fullerton

Some would say my signs helped you beat Joe Kerr, positioning you to potentially represent the 4th District in Orange County. Imagine how things might be different if someone stole those signs.

Since the June primary, your wife, Paulette Marshall Chaffee, has decided to pull papers for the Fullerton City Council. Rather than run for the district in which the two of you reside, she has pulled papers to run for District 5. As a result, we have done what we always do – paid for signs that pointed obvious carpetbagging

Our new signs are almost identical to the signs that ultimately helped you advance into the runoff.

These signs are being stolen. I have it on good authority that the culprit is none other than your wife, Paulette Marshall Chaffee.

As Fullerton’s Mayor and fellow anti-carpetbagger, I am asking for your help returning the stolen signs and to bring the thief to justice.

I believe you know how to reach me.

12 Replies to “Will Mayor Chaffee Do the Right Thing?”