While there is much in government to bemoan and criticize there is apparently much to celebrate as well, at least according to the Association of California Cities – Orange County, who are soliciting nominations for the Sixth Annual Golden Hub of Innovation Awards. 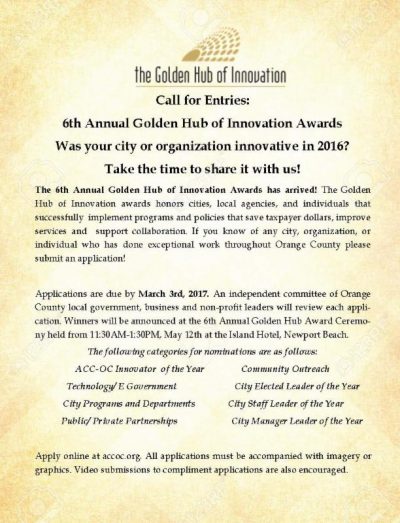 Yes, that’s right. The Government has an award show.

The ACC-OC is a lobbying organization, ostensibly created to lobby on behalf of its member Cities in Sacramento, and prevent the passage of legislation harmful to municipalities, but their actual priority seems to be lobbying Cities to implement the kind of statist, crony, public-private partnerships the organization itself prefers. For example, in one seminar sponsored in July 2015, ACC-OC advocated both streetcars and the Poseidon desalination plant in a seminar hosted by no less than Curt Pringle himself. ACC-OC also was one of the driving forces behind the HERO program, which facilitated construction of solar panels by converting the construction costs into high interest tax liens on residences (specifically, eight percent a year high, for a senior lien). So, not only does ACC-OC lobby Fullerton for bad legislation but we PAY them to do so with our own tax dollars.

That aside, in the spirit of this press release, can FFFF come up with its own nominees or, better yet, its own categories for the “Golden Hub of Innovation?” Maybe award Hugo Curiel Procrastinator of the Year for his failure to report the water loss at Laguna Lake until the statute of limitations against the civil engineer that performed the work had run? Perhaps a doublespeak award is in order for the fine folks at the NOCCCD for their efforts to claim that the football stadium they are trying to build with Measure J money isn’t going to be built with Measure J money. ACC-OC also needs a White Elephant of the Year award to honor tireless efforts of some staffers to push expensive and unnecessary infrastructure projects like streetcars, ARTIC or the “Great Park” in Irvine. Truly, the possibilities are endless.