FFFF has written about this particular scam before: the Fullerton cop union sends out a pleading request for donations to…itself. Now the supplicant is FPOA boss, Stewart Hamilton, and he writes to you just before Christmas – the Season of Giving!

The thing is so illogical, so dumb, and is really nothing more than pandering to the brainless, or maybe kids with access to their parent’s debit card.

Here’s the latest version of the plea for your hard-earned dough: 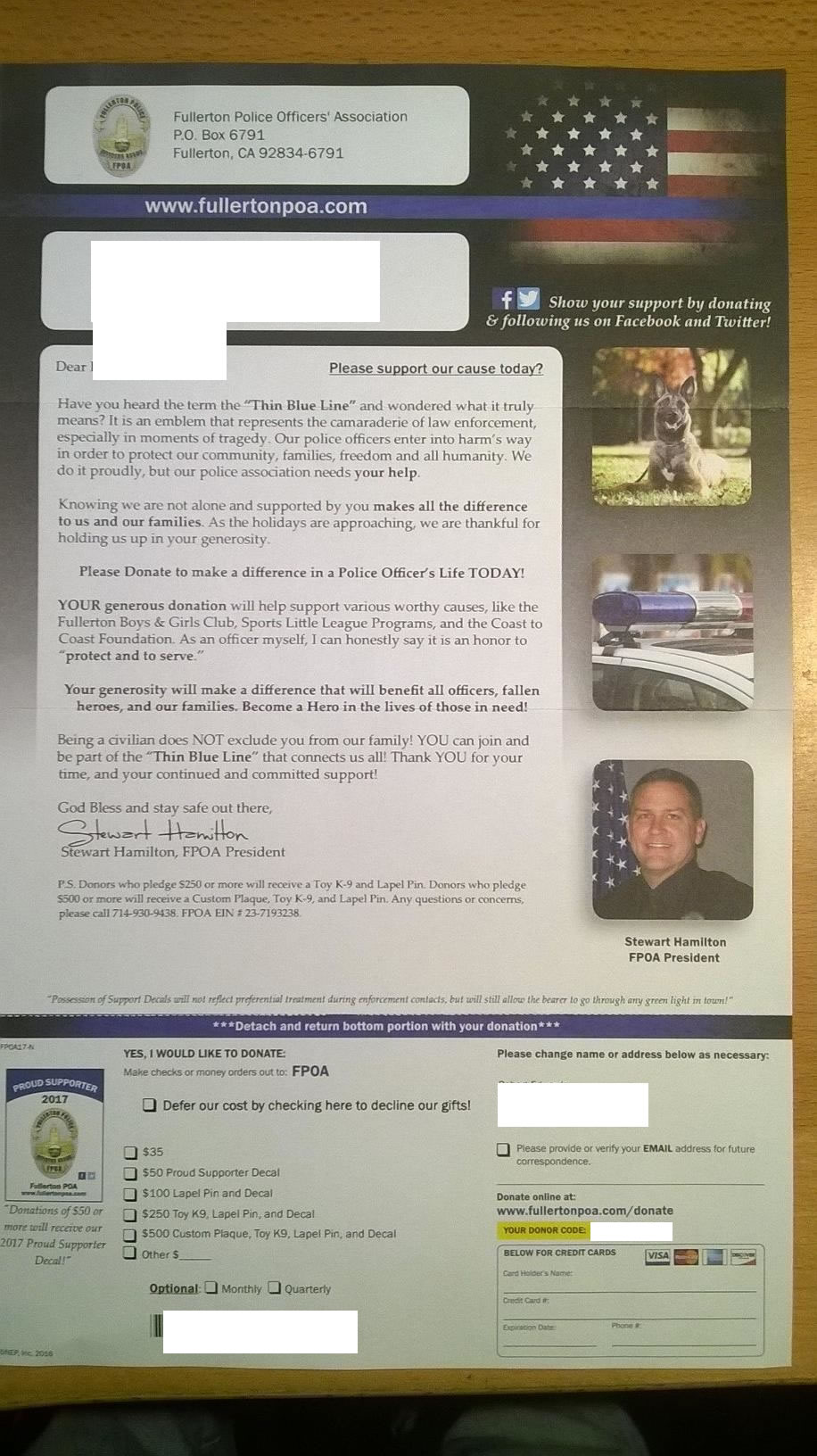 Notice first the emotional supplication from behind the Thin Blue Line: we’re there for you now we need you! Well, they want your money, that’s for sure, as will become evident by the end of the letter.

But no, it’s really not about money, see, it’s about family! “Knowing we are not alone” makes all the difference. Alone? They’ve got a over a hundred members plus a completely subservient city council majority.

The cheapest and dirtiest part of this greasy swindle is tying it to helping local charities and their good works. Except that there’s no details and no information about a charitable deduction. And what kind of gullible numbskull would make a charitable donation via the cop union? I’ll answer that: someone who shouldn’t have access to cash or credit.

The recipient is told that somehow his donation will “make a difference” to “fallen heroes” although this is not explained; possibly because Fullerton’s one and only “fallen hero” fell twenty-seven years ago.

But the union, that pours tens of thousands of dollars into each Fullerton politcal campaign to elect lackeys on the council like Flory, Chaffee and Fitzgerald, wants you to know how much they appreciate your generosity. Give a hundred bucks and get a lapel pin! Give $250 and you can add a “toy K9” to your bric-a-brac shelf! Double down on that and you will get a “custom” plaque you may hang on your den wall – right next to the plaque with the singing rubber bass.

For the guy with only fifty dollars to part with, you, sir, will get a decal for your car window, although Mr. Stewart assures us that it will not get you preferential treatment should you be unlucky enough to fall into the clutches of the FPD. Still you have to wonder if, maybe, former City Manager, Joe Felz wasn’t displaying a decal the nigh he jumped a Glenwood Avenue curb, ran over a tree, tried to get away and was subsequently driven home by grateful members of the FPOA.