Intrepid Friend, David Curlee, has got hold of mobile data computer log from the FPD patrol cars on the night City Manager, Joe Felz, was driving home after a night of campaign partying, jumped the curb on Glenwood Ave, ran over a tree, and tried to motor off. After that the Cone of Silence has descended on the incident thanks to the Fullerton Culture of Cover-up.

HCON3 is a dispatcher. U321 is a patrol unit. Note the time: 1:30-ish in the morning. Precisely the time the Felz incident occurred. 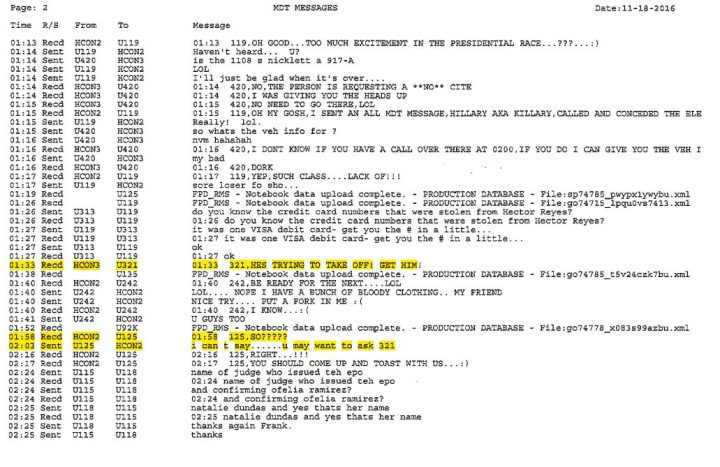 Hmm. Twenty minutes of radio silence. Then another cop who must have been there decides that whatever happened, he ain’t a-talkin’. I wonder why not. No I don’t. And notice U321 isn’t saying anything, either.

Now, remember Barb Pollinger, the neighbor who called the cops in the first place? She said very clearly that driver of the vehicle”should have stopped.”

Is it possible that the MDC is describing an incident other than the madcap motoring of our City Manager? I suppose it’s possible. But it seems pretty implausible.

The witness talks about a suspect departing the scene of an accident. The log conveys the notion of someone in need of immediate apprehension.

I think what is being described here is a crime. If that’s true, then I would also think the actions of former Chief of Police Dan Hughes in ordering his troops to let Felz go without a breathalyzer analysis, to drive him home, to tuck him into bed and to forget the whole thing would also be a crime, obstruction of justice-wise. Our lawyer, Dick Jones, said that a criminal investigation was underway/remotely possible, but since the cops arrested no one that night, and since nobody has been charged with anything that I am aware of, what gives?

The City Council once again takes up the topic of Mr. Felz’s performance tomorrow night. It might be an interesting performance.