Skip to content
by The Fullerton ShadowPosted onDecember 8, 2016December 9, 2016

And so in Fullerton we have had the spectacle of Jan Flory, a councilperson who worked us over good for two dismal terms in office, was driven out, and who returned 10 years later to provide the final act of a deplorable career.

Back in 1994 Flory ran as the Establishment candidate to push back against the reform-minded Recall that dared to drive out the incumbent stooges who imposed an unnecessary utility tax. She was the perfect candidate to advertise the fear and loathing the Old Guard had for anybody outside their inner circle.

In her first go-round she obligingly put her fingerprints on every big-government, no accountability scam put in front of her. She supported the illegal “in-lieu fee” water tax; she voted the cops and firemen the bank-breaking [email protected] retirement formula. She approved massive apartment projects in downtown Fullerton and actually voted to give away public streets to private business interests. She voted for every Redevelopment boondoggle that crossed her path. She bought the “Poisoned Park.”

And every step along this trail of tears she palpably dripped bitter venom for those who dared cross the “experts” at City Hall. Tragedy, indeed.

From 2002 to 2012 we were mercifully spared the the effluence of vindictive spleen sprayed on anybody who had the temerity to question what was going on in their own government. 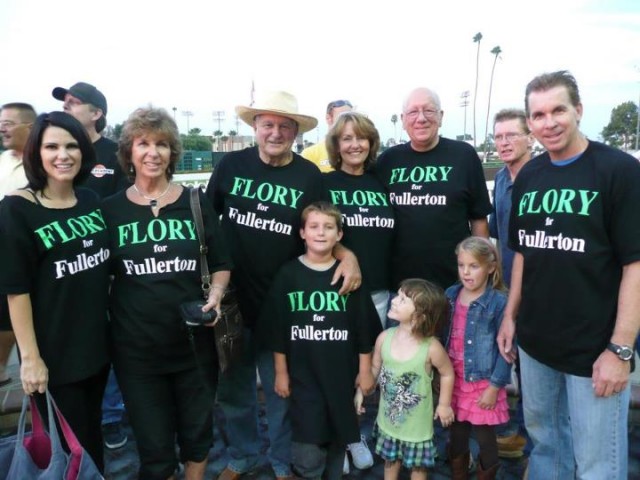 But in 2012 the moribund Establishment needed someone to ride to their rescue; and to defend, deny, excuse, ignore and cover-up the serial crimes committed by the police department; and to fight the agenda begun by a new council majority, ushered in by yet another recall perpetrated by unwashed outsiders. Who better to call upon than the old warhorse, herself.

Yes she won, by a scant 29 votes, and she immediately resumed her old role. Yet something was missing. Yes, the muumuus and wood beads were still there, and so was the old, surgically implanted steel rod. The complete lack of humor, grace or introspection suggested the Flory of old. But you could tell. Her heart wasn’t in it. Her performance was thin, shadow-like, even as she continued the water rip-off, covered-up the FPD Culture of Corruption with gargantuan out-of-court settlements, approved four non-balanced budgets – raiding reserves $43,000,000, approved more massive apartment blocks – activities that in the past would have brought a smug, self-satisfied smirk to her sneer. But the old joy was gone.

The third act was a farce – even until the inevitable bitter end: as left she hoped to give Fullerton a parting gift – the sad sack and detumescent Larry Bennet, whose job would have been to keep the “For Sale” sign over the sliding doors of City Hall.

Ah, well. Now, Mrs Flory departs again, hopefully for the final time. And as we see this petulant shrew out the door, let’s always remember her words from the 2012 campaign: to my lights… the city department heads are the heart of the city.