And how are they going to do it?

There are a lot of things wrong in Fullerton and a lot of issues at stake in this race.  But one looms over them all.

What are we going to do about our assault-happy cops? 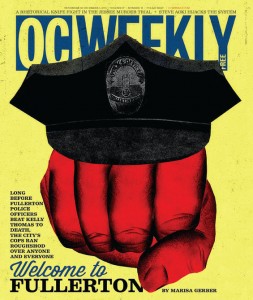 The Kelly Thomas murder was just the culmination of an escalating pattern of brutality and sadistic violence committed by our city enforcers of the law.  This is not exaggeration or casting aspersion as has been documented on this blog with precision and accuracy.  These are not all official facts ; they are all well-documented facts.

Unfortunately here is how the system works.  When a cop decides that for the fun of it he’s going to slam your head into a concrete wall or into the pavement with all his force and then arrest you for Resisting Arrest, you can file a form about it.  That form gets “investigated.”  The results of the investigation are minimal, the officer is usually exonerated, or the complaint is closed without comment.  The record of the cop who did it is unavailable for review by anybody but the Chief or an attorney who needs this information in a court of law.   What we know for a fact this means is that any random police officer can build up a record of brutalizing and seriously injuring random citizens for any reason with virtual impunity.

Also, there is the “respect” thing.  Numerous anecdotes confirm that pre-Kelly Thomas days, giving a Fullerton police officer a little bit of lip meant you were giving up your civil right not to be battered into a bloody pulp and thrown in a cell for good measure.   Because of course people who would do something like that to their fellow human beings because they feel disrespected are so deserving of our respect.  Or something like that.

What I want to know from our fearless candidates is: what are you  going to do about this?  And how are you going to do it?

132 Replies to “Who is going to fix the Fullerton Police Department?”