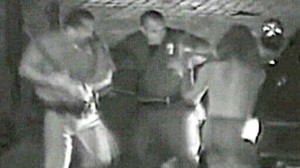 If you’ve watched the now infamous video of six overfed Fullerton cops beating the life out of Kelly Thomas and then standing around joking as he gasped for his last breaths in the street, a few feet away, you will have probably felt some pretty raw feelings. Disgust, anger, fear, pity, and sorrow are what we have all experienced.

Upon calmer reflection we can use the video to start piecing together what really happened and what motivated our “officers.” The behavior of Joe Wolfe stands out as the most egregious and makes me wonder how in the world he escaped charges by the District Attorney. Many have already stated the obvious: that DA Tony Rackaukas’ supposition that Wolfe could not know what was happening right in front of him, a mere 15 feet away is patently ridiculous. But even if we accept the unlikely plausibility of this convenient surmise, one unalterable fact remains: Joe Wolfe assaulted Kelly Thomas. We have all watched Wolfe emerge into the video frame when Kelly raises his arms, palms outward in a submissive gesture. At this point it would have still been possible for the bloated, oafish cops to de-escalate this situation. But instead Joe Wolfe for some as yet disclosed reason attacked Kelly with his baton, and Manuel Ramos joined in the fun. The murder had begun. And Kelly Thomas, accused of nothing, cited for nothing, guilty of  nothing was entering his last ten minutes of his life.

I don’t know about you Friends, but the fact that Officer Joe Wolfe is not only walking free, but actually still getting a Fullerton paycheck makes me nauseous. The fact that my tax dollars are paying this thug’s salary makes me feel even sicker, and somewhat accountable, especially if I don’t do something about it. I’m sure I’m not alone.

Hell, if anyone were caught beating an animal in such manner as the way those goons treated a human being, they would be in prison.

So what do we do? Provide helpful suggestion in the comments thread.