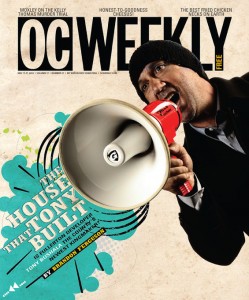 Our “millionaire many times over” admin makes the big time last week with a cover story by Brandon Fergeson in the OC Weekly. Here’s how it starts:

Tony Bushala first met Manuel Ramos more than 20 years ago when Bushala played drums with Teatro Cometa, a theater group that performed bilingual one-act plays in Fullerton in the late 1980s and early ’90s. Ramos, who was about 10, was the son of one of the actresses; his uncle, Bushala’s best friend at the time, directed the troupe. Occasionally, Ramos would sit quietly in the audience and watch rehearsals.

Bushala, now 53 and a millionaire many times over, eventually moved on from drumming to managing his father’s extensive properties in Fullerton and elsewhere, becoming a real-estate developer and a vocal opponent of city government. In 2006, Bushala was riding his bicycle when he bumped into Ramos, who was now a hulking, overweight guy in his mid-30s, dressed in the uniform of the Fullerton Police Department.

Click here to read the rest of this article.