Thursday evening the Water Rate Ad Hoc Committee voted and made some recommendations.

First, the Committee rescinded our May 23rd recommendation to the City Council to use Alternative A which would have raised ALL rates 7.8% or more. All would feel the pain evenly. 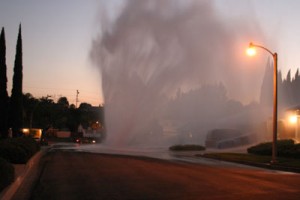 Second, the committee voted to recommend “Alternative B”. The Committee briefing describes Alternative B as an “Alternative rate structure using 1983 Rate Study meter equivalents for all fixed charges, increasing fixed charge revenue from 12% to 18% and adjustments to commodity charges to better reflect cost of service.”

I voted NO and Mr. Jack Dean abstained from recommending Alternative B. Regardless, Alternative B was passed.

Third, I moved to recommend that the City Council exempt from the water franchise tax all new revenue generated from this new rate structure to ensure that ALL new revenue goes strictly back into the water system. The motion was seconded and passed unanimously. There appeared to be too much opposition for recommending that the council abolish the hidden tax.

Speaking to the THREE members of the public who came to the meeting, I explained that 10%-11% (depends on who you talk to and which document they look at) of the money we pay for our water bill does not go into the water system and that the money, $2.5 million FY2010, goes into the General Fund. The General Fund does not contribute any money to the Capital Improvement Program (infrastructure) but does pay for things like parks, fire, police, special club memberships for the city, and other oddities. Similarly, the Paramedic Fee does not go exclusively to paramedics- it goes into the General Fund.

The end results of the Water Rate Ad Hoc Committee work are recommendations to the City Council. Whether or not they agree with our recommendations, we will see on July 19th at the Public Hearing.