This is a recollection of the day when 11 Fullerton PD units saved us from a plastic gunfight.

We were living on the North side of Dorothy Lane at this time.  I would not have allowed this if I were home, but my son Riley and his three buddies had an Airsoft war in the front yard.  There was one kid with an automatic Airsoft rifle and the other 3 had cheesy plastic handguns with orange tips. 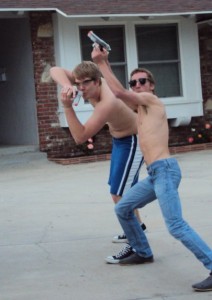 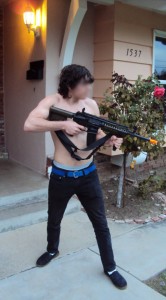 My very cool neighbor Paul, who was working in his front yard, told me later that he knew the cops were going to come because some of the people driving by were watching pretty intently. 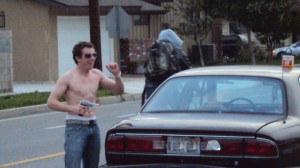 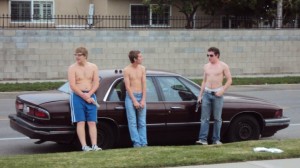 Obviously, a dumb idea.  At about dusk, three or four Fullerton cops came screeching up, pulled their guns and told the boys to freeze, drop their weapons, etc…  I’m fine with all of this.  They’ve got to protect the community.  Within a minute or two there were 11 units on scene.  One of the boys’ girlfriends pulled up while it was happening and took these pictures. 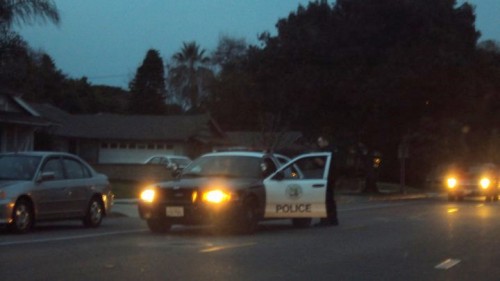 At that point, my neighbor, who is about 56, very articulate and grew up in the neighborhood, told one of the cops near him that the boys were just playing airsoft and that it’s OK.

Even after the cops were informed that it was an airsoft game, they made the boys put their hands on their heads, back toward them, lie on their stomachs, handcuff them and put them in one of the cars. My neighbor began chewing this cop’s ear that he could not believe they were not putting an end to this event, now that they knew what was going on. 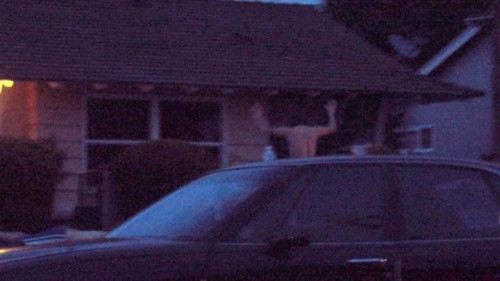 The 8oz clear plastic guns were lying on the ground near where they had the boys lie down.  There were real guns pointed at the four boys the whole time.  After the cops got all the kids in the car, they sent officers with shotguns down either side of my house, into the backyard and then asked for permission to search the house… which my handcuffed son gave them. 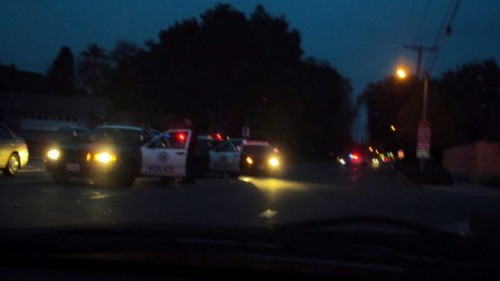 When I talked to some higher ranking guy at the station the next day, he told me that he once was on a bust in Fullerton where guys were out front with Airsoft guns while there were real bad guys with real guns, pistol whipping the homeowners inside.  He declined to get me the details of that incident.

I will say this:  Once the boys were in the back of the car and the crime scene was secured, my son told me that the police did NOT condescend to them, berate them or generally act like power hungry jackasses.  I was told that the boys having their shirts off had something to do with the reaction. It seems that speed freaks are particularly fond of going shirtless. Well, so are boys that practice for Eastside’s High school Worship Group in my garage when it’s 90 degrees outside.  Plus, it’s more fun to shoot somebody with an Airsoft gun when their shirt is off.

This happened more than a year ago and I was torn as to whether or not to allow FFFF to post the photos.  After this much time has passed, I figured it was worthwhile just to point out that Fullerton is adequately staffed to have 11 units show up to a plastic gun fight.

41 Replies to “The Great Dorothy Lane Airsoft Caper of ’09”