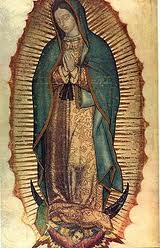 As if they didn’t have enough problems already, the Fullerton Police Department may have a new issue to grapple with: the wrath of the Almighty. According to Brandon Ferguson of the OC Weekly, a couple of Fullerton cops rudely broke up an annual celebration in honor of the Virgin of Guadalupe over in an east-side alley. According to a witness one cop was heard to yell “I don’t give a fuck. You have to end this, or you’re getting arrested.”

¡Ay caramba! As they say, ¡No bueno! What’s next for FPD? Breaking down the doors of the church because the music is too loud?

The best part of the story is that apparently FPD spokes-stool Andrew Goodrich has decided to play hard to get with the Weekly in retribution for Marisa Gerber’s magisterial story of FPD law breaking and goonery. Important job tip, Andy: angering the media is no way for an under-employed PR jerk-off to make friends.