On September 21 at 5:30 pm I showed up to the Municipal Water Board meeting because I got a tip that Don Bankhead was on the board and public comments could be made. I could not turn down this kind of opportunity so I drove down to Fountain Valley to attend the meeting. I stepped in and everyone was in business attire with notepads going about their business.The first thing I noticed was that Don seemed very different here then he did at city council meetings, he had a certain quality: he was jovial, he was talkative. He even went as far as to stay awake for the whole thing!  I turned my card in to speak a bit late but they let me anyway, however once I stepped up to the podium and began to speak the chairman’s sense of democratic freedom of speech made a complete 180. 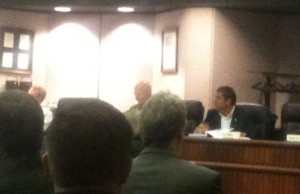 I said plainly that I did not know much about water business but I did know something about leadership, I proceeded to tell them about Don’s disappointing silence and lack of leadership in his own town where he was being recalled. I also mentioned his attack on lawful citizens acting lawfully to try to recall him and him trying to stop them illegally. While people weren’t vocal I did notice that less were looking down at their notepads and up in interest.

Unfortunately my time was cut short, being allowed to speak for only a minute of my allotted three minutes. Apparently having a lethargic,incompetent, untrustworthy sham of a councilman on your own board, who’s only action was to sit on his hands and wait for permission to lead in the face of an emergency is not important business.

Also Bankhead was allowed to defend himself which he did by saying on record ” Today the district attorney has finally released  his uh, uh, opinions… believe me for any of you who know me it is very difficult to keep my mouth shut, … we sat there and did what the attorney told us to do. He’s criticizing because of that so I want him and everyone else to know my mouth is no longer shut… gentlemen like this here will have no reason or justification to make accusations.”

The chairmen did not give me anymore time but I did not leave until I informed the people that councilman McKinley, Councilwoman Silva, Councilman Whitaker, and The Big Kernel himself, Dick Jones had all made statements about the matter. Maybe next time Fullerton will vote for a leader who doesn’t need to ask for permission to…lead.

115 Replies to “Don Bankhead Spotted Awake at a Board Meeting!”