I recently visited the Craig Hunter for Sheriff website and found this picture. 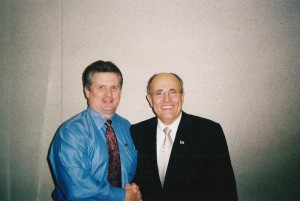 Yeah, a picture of Hunter with Il Duce himself. The guy who became an American hero and terrorism expert by accomplishing – absolutely nothing. That’s right kids. Apparently this noble nation is so starved for real heroes that you can become one by being a mayor in a town where terrorists fly airplanes into your biggest buildings.

But this post isn’t about Rudy Giuliani – not directly, anyway. It’s about authoritarianism masked as conservatism; about using the police power of the government to keep us safe from – ourselves. And that’s the vibe I’ve gotten from this Hunter guy, from his statements about marijuana and the hapless “drug war”  and about the rights “that have been given to us” – presumably he believes by the government.  It doesn’t help that most of his pictures seem to reveal a guy with a really bad case of constipation.

I really can’t wait for the day that wannabe politicians quit sharing their photos ops with Bush-era police staters.

When this campaign started I really was planning on just boycotting the whole thing. But the more I see of Hunter the less I like him.

4 Replies to “Too Good To Pass Up”