UPDATE: FYI, our document request only extended back to 2005.  Any retainer payments to GFR in 2004 are not included in the spreadsheet, below.

Yesterday we reported on the dubious contract between Tom Daly’s County Clerk office and a Republican PR man and campaign agent, Brett Barbre, that put a cool $48,000 in Barbre’s pocket, and produced no evident accomplishment. We also learned that Mr. B was not only a political supporter of Daly, but a big contributor, too – to the tune of one thousand bucks.

Today’s revelation is just as startling. Starting in the summer 2004 Daly made an agreement with an operation called Government Finance Research from Rocklin, CA, and it’s principle consultant, Peter A. Lauwerys, for a retainer deal that would cost the County $1695 per month, each and every month with special projects billed separately. Consider the implications: over twenty grand a year to some sort of research firm in order to do….well, nothing. In the documents provided to us through our request for “all activity status reports” and “lists of work completed,” we have identified two principal GRS project proposals: one was to do a “push” survey to support Daly’s desire to expand his empire by opening satellite offices. The survey project as outlined in a September 2004 proposal would cost $16,200. Apparently that project was not finished per the original contract because in January 2005 Mr. Lauwerys proposed a nine-week extension that would cost the County another $14,000 – a whopping 86% increase. The survey was finally produced in April 2005 – a meager twenty-two page double-spaced report, including tables, plus photos and appendices.

One year and twelve more retainer payments later, in June, 2006 Lauwerys submitted a second proposal: $15,800 to “prepare and complete” the California County Recorder Association’s Statistical Report for 2006, a job that Daly apparently decided to take over from the County of Riverside. Why the County of Orange and not the Association paid for this “report” is unknown.

Finally in November, 2007 and another year and a half of retainer payments later, GFR did some sort of analysis of the benefits of “outsourcing” data entry clerks and found a savings. We do not know if Daly implemented the recommendation contained therein.

Since then two more years of monthly retainer payments have been made by the taxpayers of Orange County to the lucky boys at GFR.

The County’s invoice and billing records pertaining to GFR appear to be incomplete and somewhat confused. But one thing is perfectly clear: GFR has been receiving a monthly retainer of $1700 a month for over five years, and counting. The latest check was cut on January 15, 2010, so presumably the GFR spigot has not been turned off. Not yet, anyway. 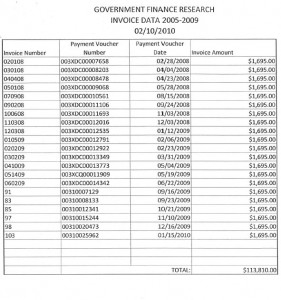 The total payout to this operation to date has been $113,810, including the 2006 California Recorders Association project. But the billing for the original satellite office survey contract and its extension in 2004 and early 2005 seems not to have been included in the material that we received; that total was $30,200, as proposed.

Of course we question the utility of these projects as even necessary; Daly’s die-hard devotees would probably disagree. However what appears to be incontrovertible is the evidence of a complete and frivolous waste of public funds in the retainer payout to a Sacramento area firm to essentially do nothing – for over five years.

As with the Barbre contract we ask: what was the consultant selection process? Was this a no-bid arrangement? What are GFR’s unique qualifications that justify a retainer agreement, and for that matter, what are the Clerk/Recorder’s needs that justify it?

Maybe one of Daly’s supporters who have been pitching his fiscal conservatism can help us out here.

34 Replies to “The Tom Daly Experience. The Longer You Look, The Worse It Gets”