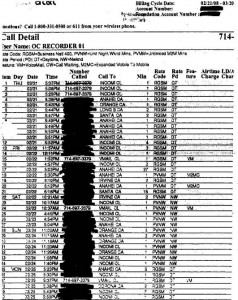 A while back I became curious as to what exactly Renee Ramirez did as County Clerk Tom Daly’s #2. I had heard lots of unflattering things about her not really doing any work and I thought would avail myself of the Public Records Request process to take a gander at some of her records, including phone calls made and text messages. We provide a typical sample of her phone records, above.

Good God! These people want us to think Ramirez made hardly any business calls during the course of a month? During one period of several days all the numbers are blacked out. And who were these people she was talking to? That must remain speculative for unless Renee tells us we shall never know.

So what gives? Are they trying to hide something?

P.S. As a point of interest I note that for a brief shining period Ms Ramirez was Tom Daly’s hand-picked successor. Guess who was squiring her around the OC GOP Central Committee, making introductions: our old pal Brett “Hall of Fame” Barbre. Coincidence? I think not.

17 Replies to “The Killer Attack of The Black Magic Marker”